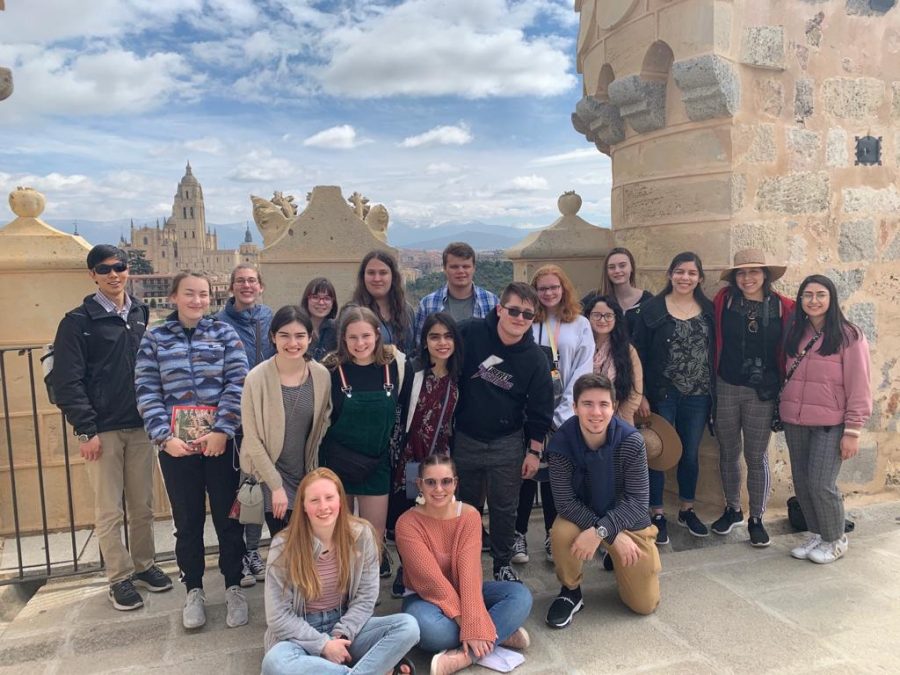 Students on the Spain trip at Alcazar de Segovia

It was early in the morning on March 16th when a group composed of 19 students and two chaperones flew out from the Eastern Iowa Airport to Madrid, Spain. This trip was offered earlier in the school year and was available to students in Spanish three or above. The flight took eight hours and as soon as they landed, the students started on their activities.

“We got off of the plane and went on a train to Segovia and spent the day there. It was the first time I had ever flown overseas so I was really excited to see what Spain had to offer,” Valerie Gonzalez ‘20 said.

Previously, the trip was for 15 days, but this year it was shortened to ten.

“We wanted to make the price of the trip more accessible. It was over 4,000 dollars for the 15 day trip and the ten day trip was 3,500 dollars,” Danielle Eivins, a Spanish teacher at City that chaperoned the trip said.

After sightseeing monuments and spending a few days together as a class, the students met their host families.

“[The students] stayed in a town near Seville called Dos Hermanas, they were all excited to meet the families they were going to stay with,” Eivins said.

Students met with their families at the train station in Dos Hermanas, recognizing them from the pictures they had sent in their emails before they had left for the trip. The students stayed with their host families for five days. In those days, students got to experience the daily lives of  families in Spain.

“I would say that staying with our host families was my favorite part of the whole trip,” Gonzalez said. “They made me feel welcome and I learned so much about the culture in Spain from them. I had a really good time.”

After those five days, students met back with the chaperones and stayed in Madrid for one more day before flying back to the United States.

“My favorite day was ironically enough the last day of the trip, but not because I was happy we were leaving but because I got to walk around Madrid with my friends and enjoy the night,” Ashley Barrera ‘20 said.

This experienced not only allowed for students to meet new people using Spanish, but it also allowed them to create great memories.

“I really enjoyed when we walked to ‘El Escorial’. We had a really energetic and funny tour guide and learned a lot about its history. That was one of the most memorable parts [of the trip],” Barrera said.

Students enjoyed the trip and would recommend it to other students in future years.

“I decided to go on this trip because I like learning about other worldly perspectives and cultures. Stepping out of your comfort zone is definitely worth the experience,” said Barrera. “The family stay really helps you open your eyes and see a different way of life.”

By going on the trip to Spain, students were able to put their Spanish to the test and learn more from first hand experiences.

“It’s wonderful when students see that the language they’ve been studying in the classroom for several years– that it works. That it’s understood. They can use those structures and those words to express themselves, to ask for things and to communicate with new people,”  Eivins said.