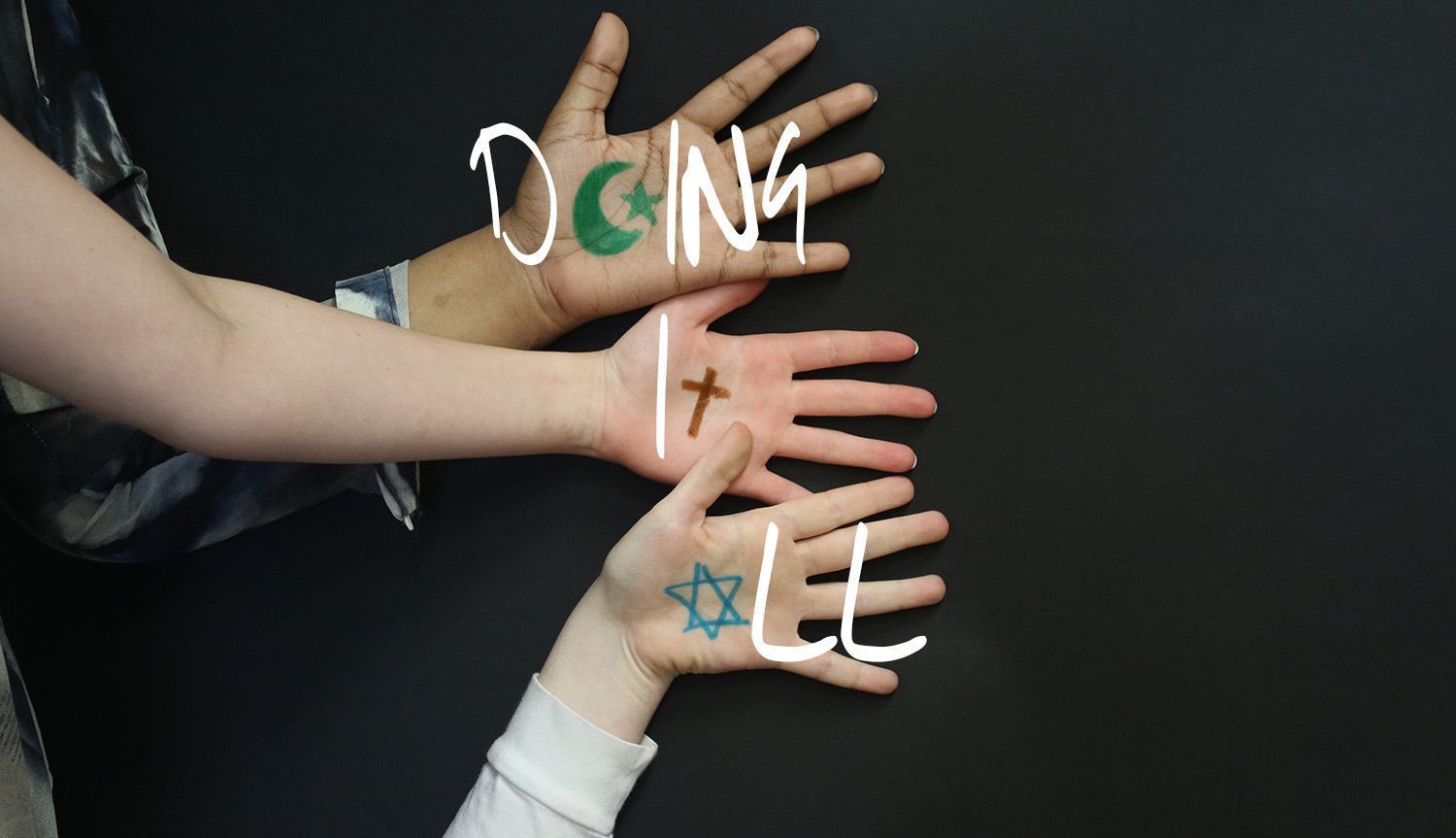 Three City High seniors choose to share their religious traditions to gain understanding of themselves and others.

There’s a great amount of religious diversity at City High, with many different religious beliefs practiced throughout the school. It’s very common for religious students to believe different things and celebrate their religions in different ways, if they celebrate at all. But what’s less common is a group of friends not only celebrating their own religious celebrations, but those of their friends as well. Despite being a very unique take on celebration, this is exactly what a group of friends have done.

“It all started when we were volunteering at Longfellow at the school carnival and we were in the cakewalk room,” Lottie Gidal ‘19 said. “But it was sad because Rachel had started Lent just a few days before, so she couldn’t eat any of the cakes, and so me and Salwa decided that we’d give up sweets too.”

Lent is a Christian holiday that involves giving up something important , beginning on Ash Wednesday and ending about six weeks later on Easter day. This sacrifice is usually some sort of food or another thing of leisure in order to replicate the sacrifice of Jesus Christ in the desert. But as time moved on, the three friends decided not to stop at Lent and to support each other further in celebrating each other’s religious beliefs.

“After that we decided we would try Passover, ‘cause Passover runs into Lent by a couple of days,” Rachel Volkman ‘19 said. “So we did Passover with Lottie. Then we couldn’t leave Salwa out, so we celebrated Ramadan for not the whole month, but me and Lottie did it for two weeks.”

Though Gidal is not herself Jewish, her father is, which was the reason for them celebrating Passover. Passover, like Lent, involves giving up food items but instead celebrates the Jewish people being freed from slavery in Egypt. They celebrate bread, because when leaving Egypt to escape, they didn’t have time to let bread rise, thus giving it up recreates the sacrifice they made.

“[Passover] was a little bit more difficult, because giving up sweets is a lot easier than giving up all bread products,” Salwa Sidahmed ‘19 said. “It was really fun, and then after that we celebrated Sater at her house, and so it was really interesting to see the two different perspectives.”

But despite the difficult nature of these celebrations, they still embrace it because of the positive experiences associated with doing it with friends.

“To start, it was about experiencing each other’s cultures and getting to know how these different religions celebrate and sacrifice for different reasons,” Volkman said. “It was really interesting going from Lent, where you just give one thing up, to Ramadan where you’re fasting for significant periods of time.”

Through not only learning about these celebrations, but also experiencing them, they’ve grown to learn more about each other’s religions.

“I thought the most informative part out of all of this was celebrating Sater with Lottie’s family because they celebrate it in a very traditional way with prayer and specific foods that we ate,” Sidahmed said. “It was interesting because Lottie’s dad asked whether or not we’d be comfortable reading some prayers too and Rachel said that it was the same God for all of us, which I thought was very intriguing.”

This tradition has also led to Gidal, Sidahmed, and Volkman understanding their own religious beliefs and traditions even more.

“Christianity and Islam are a lot more similar than they are different, and just seeing that as we both give up something and seeing the mirroring of those things is very educational,” Volkman said. “It’s interesting following these three religions that are based around the same thing and how they celebrate the different things and it really opens up your eyes that it’s really all the same.”

Seeing the similarities between the religions helped the group understand more about the messages and themes of all three religions.

“I think the main thing about it is that I didn’t know the deeper meaning to many of these religions and why we do it, even if the exact reason isn’t something we agree with,” Gidal said. “There’s a lot of fear in the culture today about different religions and people that some think they don’t share a common set of ideals with, but I think you learn a lot more about those people when you try something together.”

This exercise in solidarity wasn’t just about learning about each other’s religions. It was also about becoming closer as friends and growing closer through hardship.

“I feel like it’s been very good in that we support each other in the restrictions, because it’s sort of hard to be fasting while watching your friends continuously eat food or give up sweets then watch your friends eat cake in front of you,” Sidahmed said. “I think it’s a good way to show each other that we care and that we want to support each other.”

This support of each other’s religious beliefs and traditions has also changed the relationships between the friends.

“We’re definitely closer than we were at the beginning of high school and it’s been a great experience and I’m really glad we did it,” Volkman said. “The amount of weird looks I got when I said I was celebrating Ramadan alone was 100% worth it.”

By breaking expectations and celebrating religion in a very unorthodox way, Gidal, Sidahmed, and Volkman have learned that as long as they’re doing something together, the difficulty of it doesn’t matter.

“I think this experience has really brought us closer together. Like sometimes you really, really want sweets and you can’t have them, so to have a friend who you can complain to who understands what you’re feeling is helpful,” Sidahmed said. “It’s also helped me realize how hard it is for other religious practices. Rachel has been celebrating Lent her entire life and I never thought about just how much she’s giving up when she gives up all sweet things.”

This same sentiment is echoed throughout all of the group.

“I can say that today I have much more love for Rachel and Salwa than I did two years ago,” Gidal said. “Part of it is understanding more about them and getting to understand them on a deeper level and understand[ing] the things that we all don’t get to do together and making it so that we can do them together.”

The group believes that though religion may be something that’s divisive for some both in the United States and abroad, for many it can also serve as an outlet to come closer together and understand each other more.

“The best part is knowing you have friends who try to understand you and don’t just try to ignore an important part of who you are,” Sidahmed said. “It just feels a lot better when you have your friends there.”