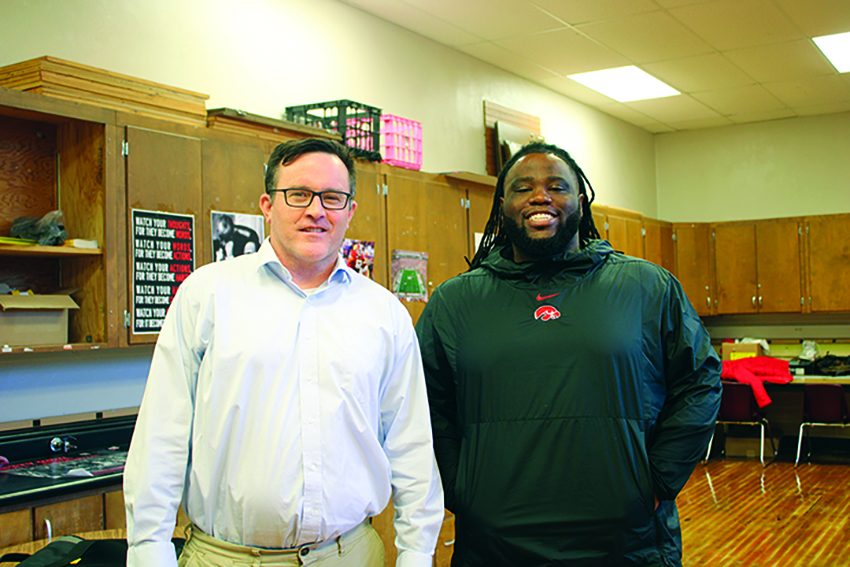 Located in the oldest part of the building, behind the study hall room, the Student Advisory Center, or SAC, serves as a place in the building for students to take a breath and is a place where students can find help.

“[The purpose of the SAC is] to advocate for students when they are not having their greatest days,” Doug Hammill, one of the two counselors working in the SAC, said. “That would be my job here, but to also advocate for teachers, so that there’s a mutual respect between both the student and the teachers.”

Students who are having a conflict with another student, with a teacher, or with someone from home are able to go to the SAC and work out their issues.

“I allow those students [to] come up here; we can talk about it, or [if] they need a quiet place to sit and think about stuff before they go back to class, or if they want us to make connections within the building, we can do that for them,” Hammill said.

As technology becomes more and more prevalent in everyday life, cyberbullying becomes more of an issue. Mediation of conflicts both online and in real life is one of the biggest jobs of the SAC.

“We do mediation with students when there’s issues here [in] the building, fights, cyberbullying, and anything like that,” Hammill said.

The other counselor in the SAC, Ja’Korey Walker, appreciates that City High has a variety of people who are able to help students with mental health concerns.

“We have a lot of resources to help,” Walker said. “The thing I like about it is [that] it doesn’t have to be one person, because if the student doesn’t feel comfortable with me, they can find several other people who are just as well.”

Students who have a concern about their mental health or a friend’s mental health are encouraged to talk to someone at City High about it. Walker and Hammill are always happy to help students that come to talk to them.

“My first goal is always just to make sure they’re safe,” Walker said. “That’s what I want to focus on first is making sure everyone’s safe and just in a good space. If I can provide a student with just a safe place where they can come and just get away and have their time away, that’s the biggest thing I want to do.”

Hammill thinks that it is important that students have access to mental health resources so that they can gain some control and have connections to help them through any troubles.

“Sometimes if things aren’t going so well and they’re not feeling the greatest, to have that person that they know they can go to give them a little bit control about their day and maybe about their situation [is a good thing],” Hammill said.

When a student comes to Hammill with some sort of problem, he asks the student what they would like the school to do for them. Hammill explains the options and is able to work with the student to help them find a solution.

“I can explain things and give them a choice,” Hammill said. “[I try] to give them some choices and some things that they may not know about that we can offer them that a lot of times en[d] up helping them.”

Walker thinks it’s important that students know that their concerns will be taken seriously, no matter what issue they have.

“Everyone’s voice should be heard and their concerns [should] be taken seriously, because we never know the types of things people are going through, so to have someone here to support you is very important,” Walker said.

Common mental health issues that are seen in the high school setting are students who have struggled with mental health in the past but never been diagnosed.

“Kids may or may not know what to look for and be able to get the help they need by the time they get here,” Hammill said.

When helping a student who may have undiagnosed mental health issues, Hammill and Walker are able to work with the family to get them involved with somebody at the school to set up a doctors appointment and start the process of getting professional help.

“Get a doctor’s appointment set up—just a checkup would be better than nothing—and let your doctor know what’s going on, I guess just making other people aware of how you’re feeling and [if something] doesn’t feel right [is helpful],” Hammill said.

Looking into the future, Hammill and Walker are excited about new programs and have hopes for new resources to be added.

“It would be nice to have another counselor in the building, because I feel like the drug and mental health piece a lot of times goes together,” Hammill said. “Maybe even drug counseling [program] within our building would be a great thing to reestablish here.”

City High used to have drug counseling, but it went away with budget cuts. The staff at City High are currently working on creating a mentoring program between students.

“We’re going to empower our upperclassmen to mentor some of the underclassmen,” Walker said. “I feel like that will be a good way to help people get connected and build relationships and make the school a better place.”

Walker stresses how important it is that students reach out if they ever need help.

“No one’s immune to needing help. I’m an adult and I need help, just as much as any student does,” Walker said. “I feel like it’s important for everyone to be able to have their voice heard.”