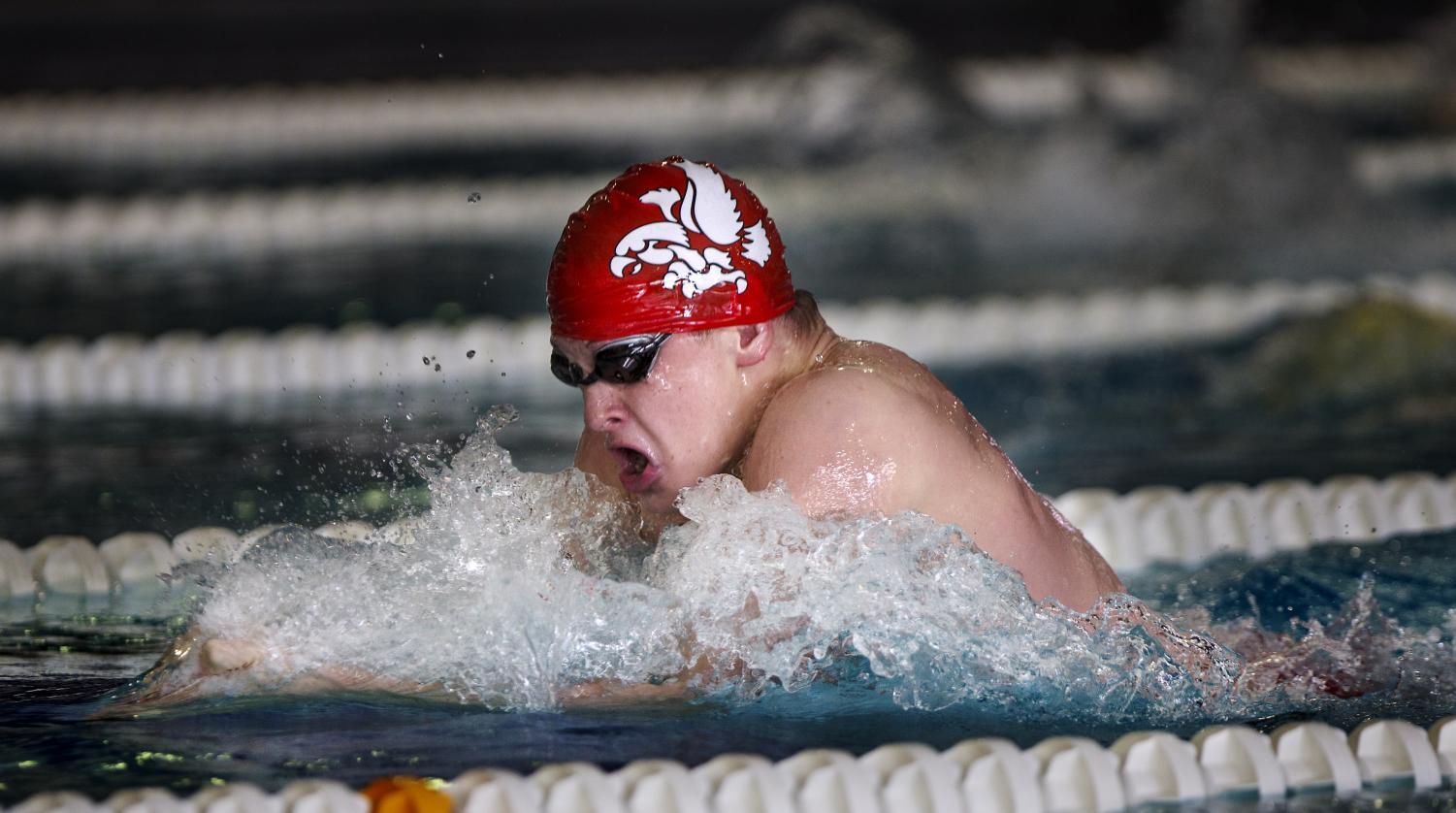 Forrest Frazier ’20 swims the 100 breaststroke at the 2018 Junior Nationals.

The water lies still, a blue mirror of liquid reflecting the dimmed lights overhead. Through the clear glass windows of the pool, the sun is a splatter painting of light, rising just above the horizon to peek its rays into the cavernous walls of Coe Natatorium. An analog clock hanging on the wall reads 6:00 am.

With a muted splash, Forrest Frazier ‘20 lowers himself gracefully into the pool, snaps his cap on, and dons his black-and-grey-tinged goggles. He pushes off from the bulkhead, dolphin-kicking underwater for around 15 seconds, then rises powerfully above the water, taking a quick breath at the apex of his stroke before plunging his arms back into the surface of the pool.

Although nondescript and inconspicuous among the crowd of morning patrons, Forrest is no middle-aged regular at the pool. He won the 2018 Junior National Championships for his age group in the 100 breaststroke with a personal best time of 52.51, and has swum times eclipsing previous Olympic gold medal swimmers. He has won the 100 breaststroke state championship twice, with a combined winning margin of over five seconds, and is committed to the current NCAA Division 1 national champions in swimming, the University of California Berkeley.

Forrest’s story has never been a Cinderella-esque tale of mediocrity turned generational talent. From his innocent foray into swimming as an eight-year-old prompted by the creation of the new Iowa City club IFLY, he has seen success in every aspect of the sport. Beginning from his surprising ability to perform flip turns on his first day of club swimming practice, while his sister Tatum took six months, those around him could see that Forrest had a rare talent within the sport.

“After just a week of practice, [his coach] called and said they wanted Forrest to participate in the time trial to try to qualify for state meet,” Danny Frazier, Forrest’s father, said.

Disregarding his initial skepticism of Forrest’s beginner abilities, Danny signed him up for the trials. Forrest qualified for multiple events, and as a result headed to the state meet to try his hand at competition. In his state first race, the 50-meter backstroke, Forrest swiftly pulled out to an early lead. Racing through the water, he passed the overhead flag with such speed that he mistimed his ‘acclaimed’ flipturn. With a resounding thud, he smashed his head against the wall.

“He was standing in the water and a referee was ready to jump in, and I was ready to jump in and he was just kind of shocked,” Danny said. “Everyone else did their flip turn and is heading back and he realized what had happened, so he pushed off, it was a legal turn, and he ended up swimming one guy back down.”

The loss was unacceptable to Forrest, even though his circumstances were unbecoming of bitterness. Disregarding the health concerns of his coaches and parents, he stewed angrily on the sidelines, furious at his defeat. This is emblematic of Forrest’s personality: he doesn’t find his motivation in the mano a mano aspect of the sport. Rather, his drive stems from his sheer hatred of losing. With the failure stuck in his mind, he began training harder, determined to be victorious in the next race.

“I just think about losing. While I practice, that’s how it comes out, that’s what pushes me harder,” Forrest said. “It’s just in my DNA. I hate losing.”

This first swim is wholly akin to Forrest’s swimming career: one of stout determination, dedication, and an unquenchable desire for success. This passion first manifested itself when he was 10 years old and swimming with high-schoolers. His coaches offered him the chance to begin practicing twice a day, with morning practices commencing at 6:00 am. Downplaying his parents’ qualms about sleeping in school, Forrest excitedly began the practices under the condition he would never sleep while in class.

The determination would pay off. He began attending meets outside Iowa, and winning those handily as well. Forrest would soon find himself number one in the nation in multiple strokes as an eleven-year-old—just two years after his start in swimming. While a snowboarding accident over winter break left him in a cast for six weeks and restricted his activity to exclusively kicking at practices, he persisted in his recovery efforts, continuing to go to practice twice a day. A week and a half after his cast was removed, Forrest swam in 13 state meet events; nine of them were individual events.

He won every single one.

“That’s when I knew that not only was he was gifted athletically, but that Forest had the complete package. He has absolute dedication to all aspects of what it takes to be an elite athlete,” Danny said.

These wins were a testament to the work Forrest had completed during his recovery. But they soon became an afterthought, and Forrest turned his focus forward.

“Winning for me is fulfilling my expectations of what I have for myself,” he said. “I am never satisfied. That’s what it is, to be honest. I’ve never done anything yet that’s even come close to satisfying me.

However, a high turnover rate of coaches within IFLY began rubbing off on Forrest. His consistency dropped, and his times no longer topped the countrywide lists. Deciding it was time for a return to the coaching of the past, he switched clubs to reunite with his old coach, Megan Oesting, at the Eastern Iowa Swimming Federation. This coaching adjustment was the remedy to Forrest’s woes. During the two-year span of his switch to Oesting’s coaching, Forrest would drop more than eight seconds from his 100 breastroke time, culminating in a time of 52.51 seconds and a first place finish at the Speedo Winter Junior Championships. He attributes this to his coach’s familiarity with him as a swimmer, and her knowing the changes he needs to make to be successful.

“I’ve had to constantly adjust my technique, and her technique training is beyond better than anyone I’ve had so far in coaching,” he said. “It’s constantly changing. What worked last season, that just doesn’t work anymore.”

“She knows how to get to me,” Forrest said.

The agreement of no sleeping in class has yet to be broken. Forrest now practices for almost 24 hours total per week, waking up at 5 am for three of those days. He lifts weights four days of the week, all while maintaining All-Academic status.

“Some people have it. It’s an intrinsic part of their personality, it’s just who they are,” Danny said. “I’ve known since that first smacking of his head and pushing back off the wall and still swimming someone down.”

While the sheer amount of time swimmers spend alone practicing may lead to distracted thoughts in other swimmers, Forrest keeps his mind away from the white noise.

But not him. The young boy who accepted the opportunity of morning practices with peculiar excitement has molded himself into one of the top swimmers in the country, and faces an opportunity to break a national time record at the 2019 Junior Winter Championships. But even with momentary success omnipresent around Forrest, he will only be satisfied with one thing: the five Olympic rings he plans to have inked on his arm. Once that’s completed?

“It’s time for a world record.”