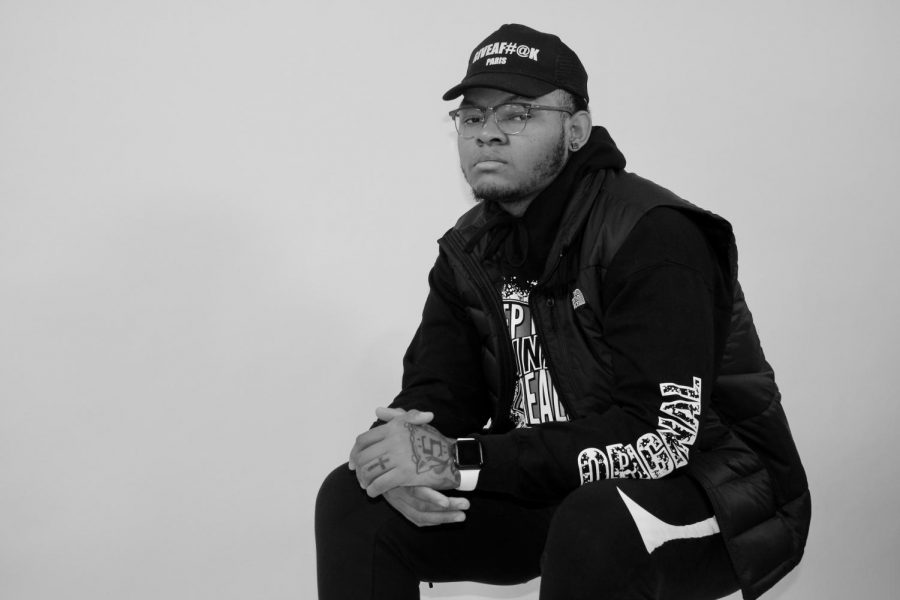 “I just knew I didn’t want to want to work for someone,” Johnson said. “I don’t like being told what to do. I want to be my own boss, [so then] I could tell myself what to do.”

In the beginning, he did not know exactly what kind of business he wished to create. However, his 2018 Civil Rights and Historically Black Colleges trip to the South invigorated Johnson when he observed the clothing shops of Clark, Atlanta, Morehouse, and Spellman.

“In Atlanta, there was a lot of black-owned businesses as far as clothing,” Johnson said. “They inspired me to do something like that in [Iowa City].”

He also credits his love and passion for fashion with inspiring him to begin his clothing business.

“I figured that I like to dress, I like the latest shoes and clothes, so why not start a clothing business?” said Johnson.

As high school ended, Johnson began taking classes at Kirkwood Community College, but decided to discontinue. Being the manager of Culvers, the fast-food restaurant located in Coralville, and working 40-plus hours while trying to manage six classes in college became difficult.

“It just wasn’t working out and I had no [passion] for school anymore,” said Johnson.

Johnson decided to take quick action on building his business.

“It wasn’t working out so I said to myself, ‘I’ve got to start this business,’” said Johnson. “I  feel like, why would you prolong something? Just get it going! So that’s what I did.”

However, in the beginning, he did not get the support of everyone, especially not his mother. She did not want Johnson to begin Finer StreetWear.

“I kind of did it behind her back because she didn’t want me to do it,” Johnson said. “She just was always doubting me and saying, ‘It isn’t going to work,’ so I just did it. The only person that believed in me when I first started out was my grandma.”

Johnson also has the support of his sister SaRhonda Johnson, who majored in business at Mount Mercy University. The two siblings give each other business ideas and motivate one another in their business ventures.

“She is more of the person who wants to teach about financial literacy. I want to do sales and [business management],” said Johnson. “We basically motivate each other.”

To keep himself motivated and not permit the opinions of others to affect him, Johnson continuously reminds himself of the goal of ownership he’s had since middle school.

With everything in place, Johnson began cultivating business plans. He did research and found a realtor who assisted him in finding the right place of business. Originally, Johnson found a place in downtown Iowa City, but it was too expensive, so he decided on a different location.

“The spot I got, located off of Highway 1, is so hidden that I don’t even like it,” Johnson said. “I’m not resigning the lease, because I’m going to be at the malls next month for Black Friday. If that goes well, I’m going to stay at the mall.”

Johnson’s store will be at the Coral Ridge Mall in Coralville for Black Friday Weekend from Thursday to Sunday between Old Navy and Abercrombie and Fitch.

“The store at the mall is so big but [I want] to take Finer Streetwear global, everywhere,” Johnson said.

Johnson believes that his store will become successful because of the uniqueness of his clothing. Most of the stores at the mall sell athletic wear while his is more streetwear, something he feels Iowa City has not seen at that magnitude.

“My clothing is way different,” Johnson said. “I never saw that when I go to the mall. I looked around every store; I’ve never seen anything of the same [kind] that I have.

“I gave a lot of free products to people so they can promote me, and use Facebook and Instagram,” Johnson said.

At the moment, Johnson’s employees consist of his brothers and his cousins, but he anticipates to make Finer StreetWear Co. an establishment that creates job opportunities for youth, especially high-school students.

“I am trying to talk to Fredrick Newell, [an iJAG teacher], about starting a youth entrepreneur group that recruits teenagers who want to start [their] own businesses,” Johnson said.