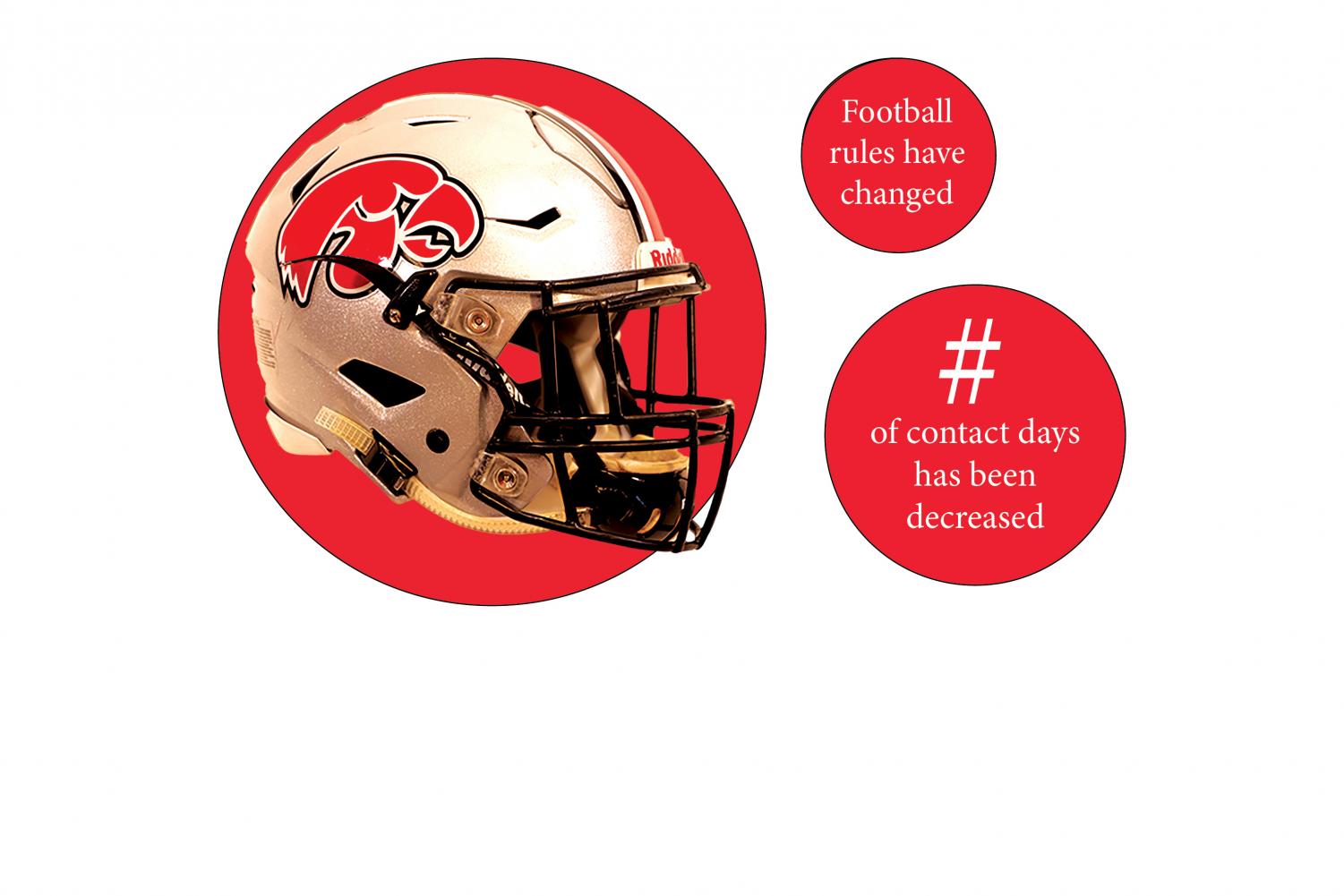 A Heads up on Concussions

As concussion awareness is increasing, there have been changes in both attitudes and policies on how to deal with the risk of concussions

Everyone only has one brain, and protecting that brain can be a challenge. According to a study published in the journal Pediatrics, football is the sport with the highest concussion rates followed by girls soccer and boys ice hockey.

“I had a lot of people pushing me to [continue playing]. I enjoyed the game a lot, and I was getting better,” Bradford said.

However, after suffering from another concussion the following year, Bradford decided to stop playing football at the end of the season.

“It was a tough decision, but I valued my own brain over the game that I was playing,” Bradford said. “Playing this year would just not be worth the risk.”

It was a tough decision, but I valued my own brain over the game that I was playing. Playing this year would just not be worth the risk.”

A concussion is generally started by a blow to the head or whiplash that creates a bruise in the brain. That leads to swelling, and since the brain is contained within the skull, there is nowhere for the swelling to go, and the resulting pressure affects the brain. Symptoms can include trouble concentrating, feeling off-balance, blurry vision, seeing double, sensitivity to light, neck pain, fatigue, and trouble remembering things.

The Director of Primary Sports Medicine at the University of Iowa, Andrew Peterson, is also the head team physician of the Iowa Hawkeyes. He goes to football games with the Iowa Hawkeyes so that he can be ready to intervene if a player gets a concussion.

The main tool used to identify concussions is the SCAT 5, the fifth version of the Sideline Concussion Assessment Tool. It is included in an international consensus statement on concussion evaluation and management.

“Pretty much everyone uses [the SCAT 5] as their sideline concussion tool,” Peterson said. “It involves the symptom scores, balance test, some memory and concentration tests. You use that to really fully evaluate [if someone has a concussion].”

Concussion diagnosis is largely based on the symptoms of the athlete, and how they act during the testing. In the fall 2019 football session alone, the City High football team had 12 diagnosed concussions. The coaches are very aware of this issue and have measures in place to deal with both the risk of concussions and their treatment.

“All coaches are educated thoroughly. Every year the state requires us to watch more videos so we all know what to look for,” football coach Dan Sabers said. “The kids are [also] very well informed.”

Over the past few years, there have been multiple rule changes in the sport to help prevent concussions. One of them includes not allowing a player to use their head to strike another player.

“There’s just been a lot of changes through my years of coaching,” Sabers said. “One of the more significant changes that I’ve witnessed is how we teach the game, how the rules have changed.”

The implementation of new rules preventing players from using their heads to attack other players requires new techniques for tackling and blocking.

“You tackle with your shoulder,” Sabers said. “You keep your head out of the game, so that it’s never there when you block. Back when I was first coaching, the facemask was part of the block strategy that we taught.”

Another change is a state policy that limits the number of contact days for the football team during practice. This is to prevent multiple smaller hits, called sub-concussive forces, that can also add up to a concussion.

“Concussions can happen in any sport,” City High Athletic Director Philip Hansen said. “We’ve really done a good job of reducing that not only here at City High but also at the state level.”

General concussion awareness enables players to recognize when they have a concussion as well as notice the symptoms in their teammates.

“[Dealing with concussions] is not just on one person. It’s on everybody,” Hansen said. “It’s the coach working with the trainer, working with other coaches, [and] other athletes just to make sure everybody’s on the same page.”

[Dealing with concussions] is not just on one person. It’s on everybody.”

Jen McHenry, the athletic trainer for City High, works closely with teams with high concussion rates such as football, but is also available for anyone who has a concussion.

“I think [the] kids overall do a pretty darn good job of taking themselves over to see Jen,” Saber said. “She’s something that is part of the game now. They know they can go see Jen at any time.”

When someone comes to McHenry about a concussion, the first thing she does is check the signs and symptoms of her pacient to see how severe the concussion is.

“Sometimes if you get hit in the head, you get a headache, no matter what, but that’s not necessarily a concussion,” McHenry said. “So we try to determine if there’s other signs and symptoms that are consistent with a concussion. And if there are, then we remove them from the game or practice.”

State law requires any student who has received a concussion to be removed from play for at least a day. In order to begin the Return-to-play process, an athlete has to receive a written medical clearance from a licensed care provider and be symptom free for 24 hours.

“It’s really hard because I can’t take an X-ray like I can on your broken arm. A concussion really relies upon the reporting of the person who got the hit, and how they’re acting, behaving, and seeming to the people around them,” McHenry said.

When something seems to be wrong, McHenry tends to err on the side of caution rather than have an athlete get injured further.

“Everyone wants our kids to be as safe as possible,” McHenry said. “We’re going to be very, very careful because you only have one brain.”

Over the past few years, an increase in concussion awareness has led to multiple changes in not only rules and regulations but also in people’s attitudes towards concussions.

“All the media coverage makes kids much more aware,” McHenry said. “You only have one brain and I think people are starting to realize that.”

As Joshua Perry, Husaln Abdullah, and other NFL players quit due to worries of permanent brain damage, and new studies have come out to show the danger of concussions, these injuries have become a controversial topic in the news.

This new perception of concussions takes them more seriously. As athletes and coaches are better informed about both the dangers and signs of concussions, they are able to identify them faster and more consistently. It has also become more common for players to come forward when they think that their teammate might have a concussion.

“When I first started [as an athletic trainer] 22 years ago, it was more common for kids to lie, and say they didn’t have any symptoms and if they acted well enough no one could tell and so then they stayed in the game,”  McHenry said. “With all the changes, I would say probably 95 percent of the time, a kid self-reports [at City High].”

22 years ago, it was more common for kids to lie, and say they didn’t have any symptoms. If they acted well enough, no one could tell and they stayed in the game.”

Peterson has noticed a similar change with his work with the Hawkeye football team. He described how it used to be rare for an athlete to self-report, but that it has been becoming more common in recent years. Most of the concussions he diagnoses are noticed during a game or practice.

“I would say still, most of the time someone gets hit in a way that it catches your attention and it causes you to look at them closely, rather than having them come out of the game and having them report their own injury, but it happens sometimes,” Peterson said.

There is no guideline for the number of concussions an athlete can get before they can no longer continue their sport. Peterson explained that this is because each injury and each athlete is different.

Peterson worries that having a specific threshold for the number of concussions allowed would deter athletes who are close to the threshold from accurately portraying their symptoms, making them hide the severity of their injury.

“Imagine if you’re an athlete in a sport where there was a three strike kind of rule and you had two concussions and you know if you get another one that you’ll never get to play your favorite sport again,” Peterson said. “That’s a pretty strong disincentive to tell [anyone] about that next injury. We really want the athletes to tell us about the injury.”

In recent years, concussion rates have been increasing, but Peterson does not think that this means that the number of concussions are increasing.

While one concussion can be a problem, it can be much worse when someone receives a second concussion before the first one is fully healed. This is called second impact syndrome.

“While you have a concussion, your brain is really vulnerable to these second impact type of events,” Peterson said. “Those tend to be more severe injuries, they tend to last longer, symptoms tend to be worse, they are more likely to lead to long-term disability, and rarely, they kill people.”

Worry about a second impact syndrome is why athletes who are suspected to have a concussion are immediately removed from the field until a test can be done to determine if they are concussed. However, some concussions are overlooked. In some cases this can cause a problem.

Second impact syndrome can also occur when an athlete returns to their sports before they have completely recovered from their concussion. To prevent this, an athlete’s recovery process is carefully monitored and further tests are used before they are released back to their sport.

“We spend a lot of our energy on making sure that people really are fully healed before they go back to play,” Peterson said.

Many people take it for granted that helmets protect the head and prevent it from being injured. This is not entirely true. While helmets help prevent more severe types of brain injuries such as skull fractures and brain bleeds, they cannot help prevent a concussion.

“[Concussions] are caused by the sheer forces through the brain, and there’s no real way that a helmet can do anything to prevent those from happening,” Peterson said. “Helmets do a great job of taking direct linear forces and diffusing them, but they don’t absorb them, so that energy still gets in[to] the brain and that’s what causes the concussion.”

Over time, football helmets have been improved, but that has not changed their function.

“They have gotten better cushioning, a better fit and [are] tighter to the head so that it’s not necessarily the helmet that moves around when you take the hit, but none [of that] will ever stop a concussion,” McHenry said.

However, helmets still provide an important protective layer for the brain, that helps reduce the number of more serious brain injuries than concussions.

“Before there were good helmets a lot more kids used to die playing football and now we are lucky that we really only have a handful of traumatic brain deaths playing football every year,” Peterson said.