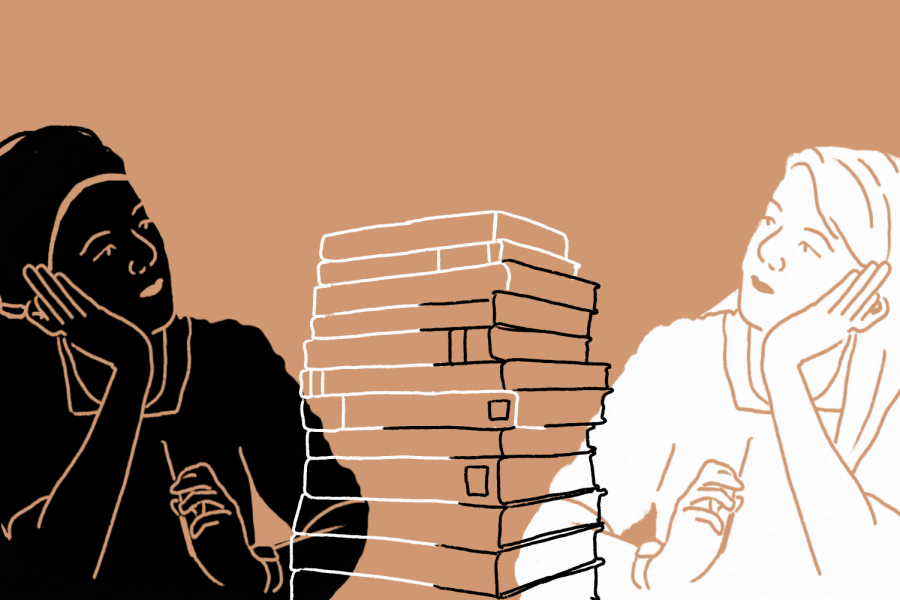 Teachers and students often feel as though conversations about race can be difficult to navigate in a classroom environment. However, these discussions can influence students’ views of race and racial issues. (Jesse Hausknecht-Brown)

Teachers and students often feel as though conversations about race can be difficult to navigate in a classroom environment. However, these discussions can influence students’ views of race and racial issues.

Race in the Classroom

Teachers and students often feel as though conversations about race can be difficult to navigate in a classroom environment. However, these discussions can influence students’ views of race and racial issues.

“I think there’s always room for conversation about any topic—especially race. With how things are nowadays, I think it’s important that we bring up race and racial issues and have [that] discussion,” Millie Garcia ‘21 said.

Garcia enjoys having the opportunity to talk about race in her classes and thinks that teachers should encourage these conversations.

“I think that there is value in learning about culture and race, especially if it’s tied to the curriculum,” Dolores Silva, a Spanish teacher at City High, said.

Silva acknowledges that some people do not want to talk about race in their classrooms.

“I can understand that some people don’t feel equipped to address something like [race], much less teach it,” Silva said. “But I think that being honest, sometimes vulnerable, can be more helpful than turning a blind eye to it.”

The curriculum for the Spanish classes discusses cultural and racial issues that come up in the culture-related part of the class.

“The class itself and the curriculum that we do for culture kind of lends itself to [talking about race] automatically, so it’s not like I want to, [but] I have to be able to [in order to] explain certain traditions, cultural behaviors and expectations,” Silva said.

Jill Humston, who teaches AP Biology at City High, makes an effort to include race and gender in her lessons.

“I make comments about how all humans are similar, how similar our DNA is [and] how similar we are to each other and how one or two changes to a gene is what can cause the change to a feature,” Humston said.

When teaching the human evolution unit, Humston likes to highlight how all humans originated from the same place and how, as they spread out across the world, their traits and features changed.

“When we do human evolution, I feel like it’s really important to talk about how the whole planet has been filled with humans that are all originating from the same place,” Humston said. “As people moved and migrated around the planet, they evolved and changed just like every other species or plant or animal on the planet. Moving into a new environment allows for other traits to become advantages.”

Garcia took biology as a ninth grader, and experienced race being talked about in a similar way.

I think we’re lucky that City High teachers let us have conversations about [race].”

“In my science classes, [teachers talk] about how race scientifically doesn’t exist, it’s just something made up by society,” Garcia said.

Silva ties her personal experiences into the curriculum of her Spanish classes and is able to share a different perspective on the culture section of the class.

“I enjoy my teaching because I obviously have a lot of background experience,” Silva said. “Sometimes I feel like everybody knows what I feel and think, but then I look at your faces I’m like, ‘Oh, yeah, no, they don’t get it’, because they haven’t experienced this.”

Garcia is appreciative of the teachers at City High for allowing students to have conversations about race when they come up in the class.

“I think we’re lucky that City High teachers let us have conversations about [race],” Garcia said.

Garcia noticed that race is talked about most often in her English classes when it comes up in the curriculum, but discussions unrelated to the class are uncommon.

“Do I think [these conversations about race] are productive? Not really, because I feel like it’s the same conversation over and over again,” Garcia said. “But I’m glad that we have the opportunity to talk about race.”

In her AP Biology class, Humston places an emphasis on the ways that historically, women and people of color have been either forced out of scientific fields or not gotten credit for their work in the field.

“[White men] were running the lab, and they had women and scientists of color doing the work but never getting the credit for it, and a lot of times that was probably the case,” Humston said. “We end up with these stories like ‘Hidden Figures,’ [where] these women were doing amazing things, but nobody knew about it.”

All AP Biology students read a book from a carefully curated list over the summer before they take the class.

As a teacher, Silva thinks that it is important to reach out to her students and make connections with them.

“Sometimes we feel uncomfortable about topics or things that are unknown to us,” Silva said. “That shouldn’t be a barrier for us to reach the child. We should also look at it as it’s not our identity that we’re changing or hindering, but that we’re trying to support someone else’s.”

Sometimes we feel uncomfortable about topics or things that are unknown to us. That shouldn’t be a barrier for us to reach the child. We should also look at it as it’s not our identity that we’re changing or hindering, but that we’re trying to support someone else’s.”

According to the National Center for Education Statistics, as of the 2015-16 school year, 80 percent of teachers in elementary, middle, and high schools were white. This is problematic because, according to The New York Times, students perform better academically when they have teachers of the same race or gender as them.

“As a white lady, I don’t experience [racism], but it’s my job and everyone’s job to speak out against it, when we see it,” Humston said. “Giving students the vocabulary or tools to be anti-racist [is important].”

Humston acknowledges that she is not perfect, but is always trying to get better.

Humston expressed frustration with the current environment regarding race, gender, and sexuality issues in America.