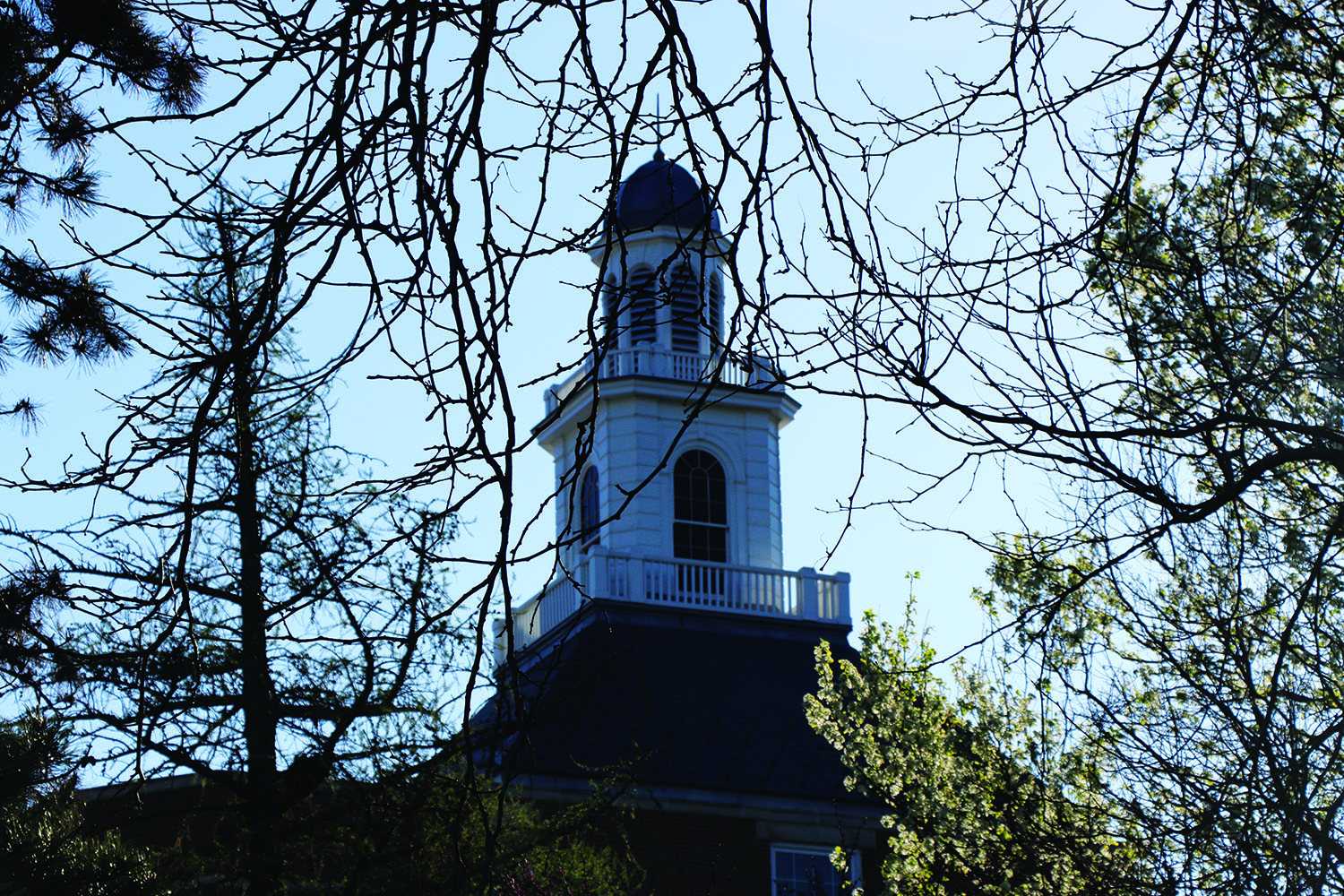 Recently, a pair from Americorps did an energy audit on City High’s energy usage. City High is using energy in many different ways and finding ways to reduce. (Natalie Green)

Recently, a pair from Americorps did an energy audit on City High’s energy usage. City High is using energy in many different ways and finding ways to reduce.

Recently, a pair from the Americorps visited City High in order to review their emissions and do an energy audit, which the school has not yet received. According to the ICCSD’s Climate Action plan of 2019, the ICCSD’s greenhouse gas emissions are split up by buildings and facilities, solid waste, the bus fleet, gasoline vehicles, and water usage. All these sectors contribute to the school’s carbon emissions.

“I think this is where I need to probably be better about thinking about what the cutting edge looks like, what should we be doing, and that’s where it comes back to [the audit],” City High Principal John Bacon said. “I’m really looking forward to their findings and recommendations. I’m not an expert in environmental issues and I hope that they can make some recommendations and we can try to put some of those things in place.”

According to the 2018 Baseline Greenhouse Gas Emissions Inventory, the main contributors to ICCSD carbon emissions are buildings and facilities, which is almost 90 percent of emissions. This means energy usage throughout the building, such as lights, heating, and other forms of electricity. This sector emitted 14,884 metric tons of carbon in 2018. However, the second-largest carbon emitter within the district is the bus fleet, responsible for eight percent of district emissions in 2018. These are the district’s largest areas of concern for bringing down their carbon emissions. However, energy use and transportation are not the only environmental footprints City High has.

“I know it sounds simple, but turning off lights and unplugging things and powering down on weekends can really save a lot of money and really minimize energy consumption. Well, the main purpose [of the energy audit] is to decrease energy usage in the buildings, since the Climate Action Plan that was done for the school district kind of highlighted energy use in the buildings as one of the big factors contributing to gas emissions in this school district,” Lisa Stark, one of the Americorps workers said. “Our big goal [is] minimizing that and then, for me, and for my colleague, is we really want to instill good practices [in] students and let them know that they can do things in their everyday lives, simple things, like unplugging your phone charger when they’re not using it.”

Alex Marsh ‘20, a student in Greenpeace at City High, agrees with Stark.

“When you drive down the street at night, all the [City High] lights are on. I’ve always wondered why the heck they do that, there doesn’t seem to be a point to that. I feel like that’s a really easy fix that would make a really big change,” Marsh said.

While not included as one of the sectors in the Baseline Greenhouse Gas Emissions Inventory, school lunches also make an impact on the environment. One of the contributors to carbon emissions in the lunchroom is meat.

Sailesh Rao is the founder and executive director of Climate Healers, a non-profit dedicated to healing the earth’s climate. He has done recent research focusing on how to engineer a safe shut down of the two main engines of planetary destruction: animal agriculture and the fossil fuels industry. His research shows that the priority should first be shutting down animal agriculture.

“There is nothing more important than getting people to go vegan and for farmers to transition from animal farming to plant-based farms,” Rao said.

“The widespread adoption of veganism is a necessary condition for the transformation of human societies to a sustainable, nonviolent civilization in harmony with a thriving planet Earth,” Rao said.

Daphne Knoop ‘20 has been vegetarian her whole life, because of this, she mainly packs her lunch from home.

“I think the [school lunch] options were okay in elementary school, but I definitely know that there would be some days when I wouldn’t have a choice to eat at school, and so I’d have to pack my own lunch,” Knoop said.

Knoop believes while there are vegetarian options at school, there aren’t enough to have variety within one’s diet.

“Being a vegetarian [and eating school lunch] is possible, but it’s quite difficult. I think you have to be eating the same thing every single day really to make that work. I think when you make a commitment to go to a plant-based diet, you’re also really making a commitment to pack your own lunch,” Knoop said.

This is an issue that Stark has been working on. She is looking at preparing plant-based meals that taste good and training the staff to do so.

“[Plant-based food]’s definitely a priority of ours, and we have been researching ways to help the district implement more plant-based meals,” Stark said.

Another environmental concern in the lunchroom is food waste, however, it is something the district tries to cut down on.

“We’d much rather feed our students than the landfill,” Demory said.

One solution some schools have started or are planning on starting is composting. This is another initiative Stark is looking at and piloting at one school in North Liberty. However, there are certain obstacles when facing a large scale composting initiative, for example, a large amount of waste would require worms to decompose among other issues.

“There’s a lot of behind the scenes work happening with the hauler,” Stark said. “The people come up and come and pick up the recycling and the compost.”

All of this needs to be okayed with the hauler due to their operation’s capabilities and size when it comes to picking up the waste from all the district’s schools. Because of these obstacles, composting may not be feasible within the ICCSD.

“It’d be really great to have the support from the facilities operations right now at this point, but, for composting at City High, we don’t have the backing of the support from them,” Stark said. “We don’t have the okay for Johnson County Refuse to pick up composting. So then everything kind of falls back on, ‘Okay, well, how if someone’s going to collect food waste, how is it going to be managed?’ It’s a challenge. That doesn’t mean that it can’t be done either.”

Plastic waste is another issue that Stark, along with her colleague Adrianna, is trying to combat within the district lunchrooms.

“[It would be] great to get this single-use plastic out of the cafeteria on leave and transition back to actual silverware,” Stark said. “The problem with that, that I’m hearing from facilities operations, is the washing of it as well that people throw it away and so then they have to buy more and from a cost perspective, it costs too much money to replace all the silverware that gets thrown away.”

The district also tries to minimize its plastic use, however. Because elementary schools don’t have their own kitchens, there is more packaging used at those locations.

“In the high schools, we always encourage students to use trays rather than paper plates.  This has improved in the new [location, Liberty High School,] and [the] remodeled [location, West High School] and I’m hopeful it will also improve at City after renovation,” Demory said.

Bacon also agrees that plastic in the lunchroom is an issue at City, especially the plastic milk bottles.

“I think the biggest weakness that we have always driven me crazy is the throwing away of those plastic milk bottles in the lunchroom,” Bacon said. “I’ve been here 10 years, and it seems like every other year we have a motivated group of students that wants to do something [about it] and they get it going and then it stops. I’m sure we all have some responsibility as to why that continues to fall apart, but ultimately I think that’s one where the school district probably should be called to the carpet.”

She is also working to add more plants to the campus.

“I would really like to see school gardens have more participation and a lot more of student involvement, especially because I feel like it’s a really good way to get out of the classroom and outdoors and learn about their environment and nature,” Stark said.

“We got AP environmental science off the ground and I think that’s really good. I was really driven to make that happen when I met with students last year. And that was one of a few ideas that we brainstormed. That really was an example of a student voice, taking action in the school,” Bacon said.

Over 80 students have enrolled in AP environmental science, according to Bacon. Stark agrees with Bacon that the student voice is necessary and she is pushing for more student involvement with her initiative.

“[Students] can help by expressing interest and getting involved and spreading the word and talking about these things in their peer groups or in their classes, and really looking at how they change things in their daily lives,” Stark said.

Marsh hopes that she can help educate her peers in order to make City High more environmentally friendly.

“I think advocating and getting people more educated is honestly a lot more valuable than we think. I think there are little things that they can do to help. Just being more aware of what you’re doing every day and how you can change it, the little things,” Marsh said.