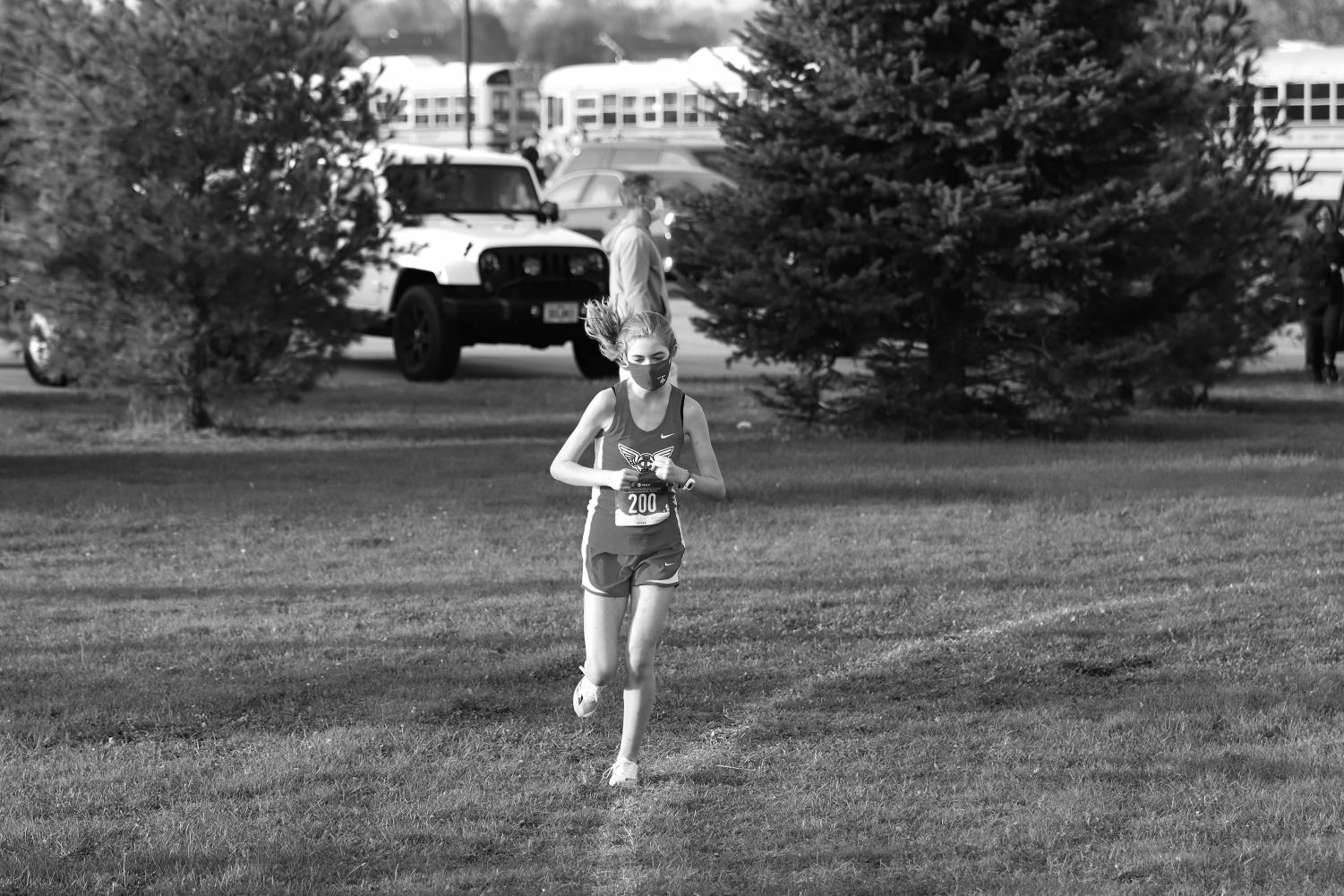 Greta Boerner ’24 running a 5k with about one mile left in her race. (Rachel Marsh)

Greta Boerner ’24 running a 5k with about one mile left in her race.

The COVID pandemic has changed a lot in today's society, including the steps that athletes and coaches have to take in order to continue their sports

From masks to screening questions to staying six feet apart, City High sports teams have to constantly keep regulations in mind that they would never have considered in past years.

I thought it would be different, but I didn’t think that [sports] could change so much.”

Similarly, Grace Campion ‘22 also didn’t expect the season to end up looking the way it did.

“I don’t know why I thought this but I kind of thought that [COVID] would be over by the time school started,” Campion said. “I thought everything would be okay but that didn’t happen.”

Through the end of September, athletes had to arrive in masks and go through a screening process consisting of a temperature check and some questions regarding their social contact. If an athlete responded yes to any question or had a temperature higher than 101.4 degrees Fahrenheit, they could not practice and had to quarantine for two weeks. However, this is no longer the case.

“With the district beginning the hybrid learning process, we wanted to keep consistency in all programs,” Athletic Director Phillip Hansen said. “Students are asked to self-monitor and take their temperature daily before they attend school. We are asking for the same process to be used when attending any activity.”

Coaches are given the same safety regulations as the rest of the district staff. These regulations are mainly based on the guidelines put in place by the Iowa Department of Public Health and Johnson County Public Health.

“As the pandemic has been very fluid throughout, the district continues to update guidelines based on their recommendations,” Hansen said.

It is then the coaches’ job to implement the district’s regulations.

“I know football. I’m not gonna claim to be an expert on [infectious diseases],” Dan Sabers, the head coach of the City High football team, said. “We are doing a good job of taking and following directions I believe.”

According to City High football players, they wear masks during both practices and games, unless they are getting a drink of water or gatorade.

“It’s definitely an adjustment and it’s definitely different, [but] it’s what we [have] to do,” Raphe Hamilton ‘21 said. “It [also] wasn’t as hard as I thought it would be to work out in a mask.”

Sabers worried about forfeiting football games due to a positive COVID test on the team.

“We have to realize that our biggest competition is going to be this virus. It can shut us down quicker than anything else,” Sabers said.

If one person on one of the high school teams tests positive for COVID, ICCSD regulations designate that the entire team has to quarantine for two weeks. This has already happened to both the girls swimming and the girls cross country teams.

We have to realize that our biggest competition is going to be this virus. It can shut us down quicker than anything else.”

“It was disappointing just because I was excited to come in, race really hard, and be with all my teammates but it’s understandable under the circumstances,” Campion, a member of the City High girls swim team, said.

Girls head swim coach Zane Hugo was not deterred by the sudden break in practices.

“From the start we knew this wasn’t going to be a regular season. I’m here to coach swimming, but my main goal is to make sure everybody is staying healthy and comfortable with the decisions they make,” Hugo said.

Since the swim team practices at Mercer Park Aquatic Center, they have to follow both the guidelines of the ICCSD as well as the Iowa City Parks and Recreation Department. Additional guidelines include a temperature check at the door and the lack of spectators at home meets.

Though swimmers are unable to swim while wearing their masks, many bring plastic bags to store their masks by the side of the pool. At practices, team members social distance as often as they can.

“Everyone is together, but every [group] has their lane,” Campion said.

While the exact procedures at meets are determined by the hosting team, they are generally similar. Athletes wear masks as much as possible and swim to the other end of the pool with their mask after their race, so that they do not get close to the next group of swimmers getting ready to start their races.

“It is a team activity [but] we’re still taking the proper precautions to be spaced at the right distance,” Hugo said.

For the volleyball team, staying socially distant can be even harder. Due to this, volleyball players are split into teams that tend to practice separately, are encouraged to use hand sanitizer, and wear masks throughout the majority of their practices. Only during the last few minutes, when they practice game-like situations, are they allowed to take their masks off.

“It was particularly challenging when we were practicing in August with no air conditioning in the City High gym. However, all players wore their mask without complaint each day,” head coach of the City High volleyball team, Tricia Carty, said.

During games, volleyball players are assigned a specific chair, which is spaced sixfeet away from the next chair. They only have their masks off while they are playing. Additionally, their spectators are continuously limited to the current ICCSD guidelines.

“It was kind of dead quiet in the gym [without spectators],” Vanderhoff said. “There’s moments in the game where no one’s saying anything and it’s kind of awkward. We’re not used to having that.”

For cross country athletes, dealing with the risk of COVID is easier because practices take place outside.

Teammates running side by side and pushing each other to go faster has always been a big part of cross country. However, this year the City High girls cross country team has been divided into three separate practice groups consisting of 15 to 18 athletes based on pacing. Runners are then further divided into groups of two to four runners which start 30 seconds apart for practice runs.

“This is something that it took us a little time to transition into. Things have evolved since the very start of summer running,” Ahlers said.

Cross country athletes come to practice wearing masks and continue to wear them unless they are further than six feet away from the closest person.

“If they’re on a run and need relief from their mask, they take action to move away from their teammates,” Ahlers said. “But often, a lot of runners choose to just wear their masks as they run.”

At meets, City High cross country athletes wear their masks for the first 400 meters tucking them into their shorts or beneath their chin for the majority of the race then returning to wear them once their race is finished.

“I think that so far the only team in the whole state that wears their masks that we’ve seen at other meets, that we’ve heard about, watched, or seen recaps of, has been our team,” Ahlers said.

I think that so far the only team in the whole state that wears their masks has been our team.”

While cross country athletes experience differences in the way their sport is played, golf athletes are not noticing a major change.

“It’s not as different as you would think. Specifically [in] golf, you can kind of social distance easily as it is, so not much has changed in that aspect,” Jack Meis 21’ said.

Earlier in the season the Iowa City Athletic Association published a set of rules and regulations for golf. The rules recommend athletes to wear masks inside the clubhouse, on the practice green, in the driving range, while warming up, and on busses. Once the competition begins, athletes are allowed to remove their masks.

Rules also recommend that players keep their own scorecard while also keeping somebody else’s score on their card to limit exposure to other players. They recommend that only around one to two people ride on a golf cart or that alternatively players walk to their holes. Flagsticks are also allowed to be left in, which is unusual in golf.

“If someone messes up it messes it up for everybody so I think the athletes have been very accommodating to that, and have not resisted wearing masks,” Brighton said.

For screening, the Iowa City Athletic Association recommends parents take temperatures of athletes prior to coming to practice.

“We’re keeping a written list, we ask them a set of questions every single day that’s recorded. So we are tracking and tracing where they have been prior to getting the practice,”Brighton said.

Earlier in the season golf took a two week break as well as at the start of the school year cutting a large chunk of time from its 10 week season with their last competition held October 1 at the Pleasant Valley Golf Course.

If anything I think we should be doing more, I definitely don’t think we should cut out any of those restrictions. It is kind of a bummer, but I think that’s what we have to do right now.”

“We’re fortunate just to be able to do what we can do on the course and I think the kids are very appreciative of that,” Brighton said.

As fall sports begin to wrap up with football ending on October 23, swimming on November 14, golf on October 9, volleyball on November 5, and cross country on October 31, coaches and athletes reflect on an unusual season.

“I think there’s so many beautiful parts of sports: seeing what we can do to push our own limits and what we can learn from sports, but this is just a whole nother kind of learning,” Ahlers said.

While athletes have mixed feelings about these regulations, without them they would not be able to participate in their sports.

“Especially for a senior season, it’s not ideal, but I do think that [the regulations] are completely necessary,” Meaney said. “If anything I think we should be doing more, I definitely don’t think we should cut out any of those restrictions. Of course, it is kind of a bummer, but I think that’s what we have to do right now.”