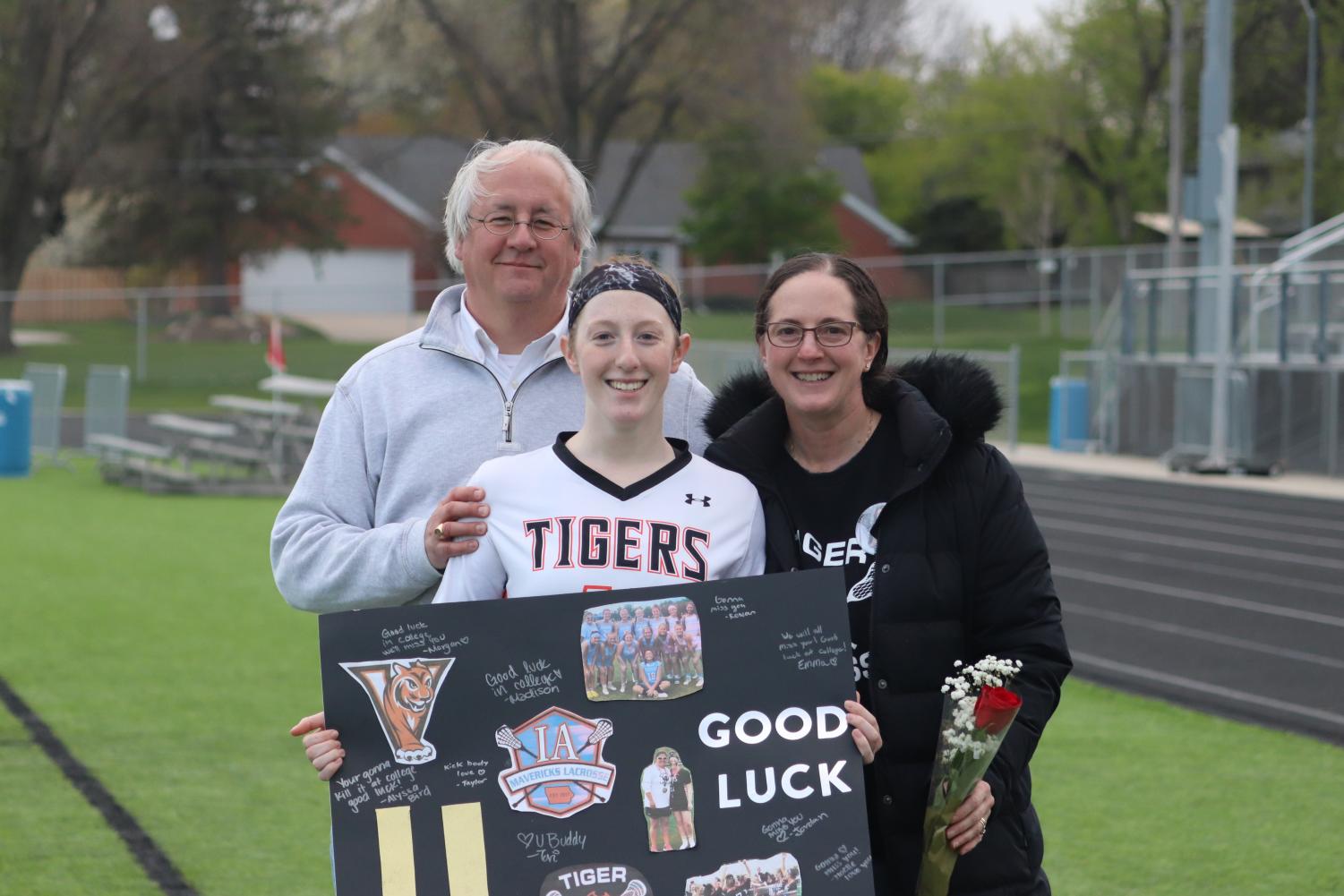 Kate Kueter ’21 poses with her parents on her senior night. (Julianne Berry-Stoelzle)

Kate Kueter ’21 poses with her parents on her senior night.

From driving two hours to get to practice, to being a junior high athlete on a high school lacrosse team, to having to train by herself the majority of the time, Kate Kueter '21 has overcome a lot of obstacles to continue playing her favorite sport

An athlete’s dedication to their sport is constantly tested, but for Kate Kueter ‘21 these tests of dedication were more difficult than for most athletes.

Kueter began playing lacrosse around the age of nine when she joined Annandale Youth Lacrosse, a club team in northern Virginia. She recounts that her initial reason for playing lacrosse was to avoid playing soccer.

“The choice as a kid was you played soccer or you played lacrosse,” Kueter said. “And I really didn’t want to play soccer. I was highly against it as a child, so I chose lacrosse.”

Despite her initial reasoning, Kueter quickly found aspects of the sport that she enjoyed.

“There were a lot of things I really liked about it. I liked that I had a bunch of what I thought of as fancy equipment, like I had the goggles, I had the stick, and I could have pretty colors on my stick,” Kueter said. “[Additionally,] when you put the goggles and the mouth guard on and you’re running towards the ball, you feel so awesome, like battling attack mode.”

When her family moved to Iowa in 6th grade, Kueter had to try to find a new lacrosse team. The closest one, the West Des Moines Lacrosse Club, was a two hour drive away.

“We went over to West Des Moines to just try it out and see if it was something we were interested in being a part of and we connected with them,” Kueter said. “I went to one practice, then it was two practices. [It] turned into a fall ball season [and then I] came back for the spring season. It was a great experience with them, and I’ve been playing with them ever since.”

While she was glad to be able to play lacrosse once again, playing for the West Des Moines Lacrosse Club came with some difficulties.

“When I first started playing with the Tigers, I got really nervous before games, partly because I was a junior high student, and I was playing against these high schoolers,” Kueter said. “I thought that was a little insane but I also thought that I could totally beat them. Our skill level matched even though our ages were completely different, [but] they were physically bigger than me.”

Being a junior high student, who is a starter on a club team consisting of high schoolers, was not made any easier by the fact that she lived in Iowa City.

Reminding myself that I knew what I was doing and [that] I was bringing something that would benefit the game when I stepped onto that field really helped me.”

“I was a little afraid of disappointing my teammates. That was the huge thing for me when I first started playing with this team because I was a younger kid, I was a smaller kid, and I was a kid who lived two hours away and barely came to practice,” Kueter said. “Reminding myself that I knew what I was doing and [that] I was bringing something that would benefit the game when I stepped onto that field really helped me.”

Due to the long drive to practice, Kueter normally goes to practice once a week in the fall and then twice a week during the official season in the spring.

“I’ll go to practice two times a week, and I’ll match whatever they do practice wise with wall ball, so I’m still practicing. I’m just not practicing with them,” Kueter said.

When training by herself, Kueter bounces a lacrosse ball off of a solid wall, also known as wall ball. She often does this at the North Dodge gym, followed by cardio and footwork ladder drills.

“[Kate] puts in a tremendous amount of work outside of practice,” Meghan Gruver, the West Des Moines Lacrosse Club head coach for high school girls, said. “If she did not put that work in, then she would not be where she is as a lacrosse player right now. The fact that she’s willing to do that says a lot.”

Since Kueter is not able to make it to many practices, she makes the ones that she goes to count.

“When she comes to practice she works hard, she plays hard. She plays every practice like a game [which is] huge,” Gruver said.

Kueter described how in the beginning she was motivated by worry that her teammates would think that she was slacking because she was not at practice. Now, Kueter no longer feels this way, as she has had the chance to get to know her teammates.

“The relationship is a lot better now because they know I put in the work and so they respect when I’m there. I think that they now understand the work it takes to actually get me there. I think they appreciate it more,” Kueter said.  “Right now it’s kind of a running joke in my team because I have this one teammate, who’s our goalie. She calls me a slacker because I don’t go to practice that often, and at the beginning of my journey of lacrosse that probably would have hurt my feelings, but now I laugh.”

Throughout this journey, Kueter has learned to know what she is capable of and not let what others think get in her way.

“They didn’t understand my story,” Kueter said. “So part of it is, I should tell my story. I shouldn’t be afraid of telling them what I do. And then the second part of it [is] I have to just ignore what they don’t understand, and just focus on what I know I can do. So I think I learned that lesson: just do what I can do, and do it the best I can.”

Kueter has also found that she no longer gets nervous for lacrosse games unless it is for a big championship game.

“It’s second nature. I get on [the field] and know exactly what I’m doing,” Kueter said. “I mean yeah sure, I get nervous, maybe before really big games, that’s when I get nervous, a little bit, but also a small part of me is like, I’m not nervous because I have a great team. It feels like a home being on the field, so why would I be nervous at home?”

Her senior year as a player for the West Des Moines Lacrosse Club, Kueter is a starting defender and a team captain. Jade Wilson ‘22, who goes to Waukee High School in Des Moines, is also a captain.

“Kate is a strong player, and she knows what she’s doing. She’s a great leader,” Wilson said. “It’s great having her as a captain, and as a fellow teammate because she has such experience and really helps perfect other people’s techniques.”

Mackenzie Hermanson ‘21 also goes to Waukee High School. She and Kueter have been playing together on the Tiger lacrosse team since seventh grade.

“[Kate] is the most loud and most wonderful person you’ll ever meet. She’s just a born leader and you can see it on the field. She cares for everyone. She makes sure nobody’s left out. She is the person you want as a teammate,” Hermanson said.“She has the commitment. She has the drive and she’s grown so much as a teammate and as a player.”

[Kate] is the most loud and most wonderful person you’ll ever meet. She’s just a born leader and you can see it on the field. She is the person you want as a teammate.”

Both Hermanson and Wilson are familiar with Kueter’s situation and value what she brings to the team.

“It’s hard sometimes not having her at practice because she’s such a major part of our defense, but when she’s here, she’s on her game and she’s ready to go into determined focus. She works with what she has,” Wilson said.

Due to the extensive drive, Kueter’s parents drive her to practice as well as lacrosse games on weekends. This puts a lot of responsibility on her dad especially, since he does most of the driving.

“[My dad] is the one who has to drive until 10 at night on a busy interstate. He is the one that has to do work from the car sometimes,” Kueter said. “I know that he has given up a lot and that he has had to work around me playing lacrosse and so when I get home I also give him a big hug because I am so thankful that he has done this for me.”

“[I am] very happy and very grateful for him and all that he has done,” Kueter said. “Because he’s not just on the sidelines, playing on his phone, waiting for me to be done, and then chauffeuring me home. He is not just a chauffeur. He is being a part of it. He purposely goes and he helps out. He has been not only a supervising parent but he has been an involved parent. I’m very grateful to have that kind of parent who does that for me.”

Recognizing how much her parents do for her in order to enable her to play lacrosse, Kueter tries to make their lives easier.

Starting next year, Kueter will be playing Division III lacrosse for the University of Mount Union. She is very excited about this opportunity, since playing lacrosse in college is something that she has always wanted to do.

“I would say eighth grade, I knew I wanted to play lacrosse in college. I just had a feeling like I did not want my lacrosse career to end after high school. That was insane. I literally could not imagine my life without playing lacrosse. It felt like I would have nothing to do,” Kueter said.

What Kueter is most excited about is the consistency of college lacrosse, where she can practice with her team every day.

“In college, I’m going to be able to see my teammates all the time. It’s going to be awesome,” Kueter said. “I’m so excited because that’s the thing I really miss out on playing with the Tigers. Obviously I have a connection with that team and it’s a connection that is very special and I will hold it with me forever and I do consider them both teammates and friends, but I also don’t get the sort of connection that other athletes have where I can hang out with them on the weekends or grab a coffee. So I’m excited for that in college. I’m excited to have that connection.”