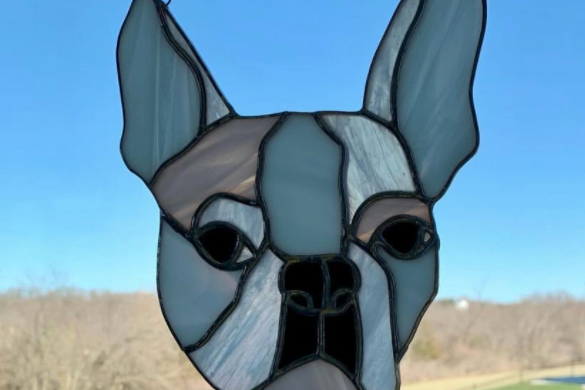 Jake Roth ’22 made a stained glass bulldog, as pictured above.

During his freshman year, Jake Roth ‘22 decided to take a glass class in the art department at City High. He chose to take the class because it seemed fun; two years later he is selling his stained glass artwork on Instagram. What started as a hobby turned into a full-fledged business.

“While I was doing [the glass art class] sophomore year, I was just getting into it on my own and at my house,” Roth said. “I started getting supplies, they’re kind of expensive so I gradually started getting stuff, and then expanding in my garage.”

Roth started learning how to make stained glass pieces when he was taking glass classes at City High. Then, after making around $100 at the City High art show, he became more motivated to sell more of his work.

“People told me that my stuff was good and that motivated me too, and then some people asked me to make them something and they were like, ‘How much?’ and I was like, ‘Okay, I mean, I’ll just give it to you, but if you want to pay for it, that’s fine.’ And then I was like, ‘Okay maybe I could actually sell this stuff,” Roth said.

Michael Close, a City High art teacher who leads the glass classes, noticed how great Roth’s art was and encouraged him to do more.

“Stained glass came really naturally for Jake, he has been really good at it ever since the beginning,” Close said. “I made sure to let him know that he was good at it…and then he kept making work and it was just beautiful.”

Stained glass came really naturally for Jake, he has been really good at it ever since the beginning.”

When in-person school ended last spring and quarantine started, Roth was left with extra time on his hands and started making more stained glass pieces as a hobby.

“I started making stuff as a hobby during the summer when I didn’t have school to do, and during quarantines,” Roth said.

It was during this time that Roth started an Instagram page to sell his artwork. The account’s handle is @the_stained_glass_guy and the first post is dated June 2, 2020.

“I’ve always liked getting into different hobbies and stuff, and I just haven’t found a hobby that I’ve gotten into in quite a while,” Roth said. “As a kid, I was into paper folding and origami stuff and then some other phases with other things. It was kind of a hobby that I started at school and then I got into it on my own.”

When he was beginning to make stained glass pieces at home, Roth worked with Close to make sure that he had all the glass he needed.

“There was a woman who ran a stained glass studio out of her basement and she was moving out of state and didn’t want to take any of it with her, so she gave us a big glass donation,” Close said. “And so I called Jake and I made him help me move stuff, and I basically paid him in glass. That’s not something we do with all our students but Jake’s so nice. Such a nice guy.”

Roth explained that he is thankful for Close’s help and hasn’t had much trouble finding glass to use. He has been able to find the rest of the materials he needs online.

“[Close’s help has] been nice, but I also buy [glass] at craft stores or there’s a couple of local people in town that sell it,” Roth said.

The process of making a stained glass piece begins with creating a template on paper that shows where the different glass pieces will go, and how they will align with each other. Close describes this as the “blueprint” for the project. Using that guide, an artist will cut pieces of glass to fit the template.

“We trace [the template] onto a heavier paper that’s a little more water-resistant, and then we cut out each of the pieces, glue them onto our glass and take a glass cutter and cut out the pieces,” Close said.

I’ve always liked getting into different hobbies and stuff, and I just haven’t found a hobby that I’ve gotten into in quite a while.”

Next, the pieces of glass need to be smoothed out, because, as Roth explains, cutting glass will leave an unwanted jagged edge. The grinders that smooth the glass are essentially glass files that spin very quickly in order to smooth down the edges.

“After you cut the glass out, you’re gonna want to grind the edges, so it’s nice and smooth,” Roth said. “Because when you cut glass, it’s not perfectly smooth after you are breaking it.”

The next step is to place a special foil tape on the edges of the glass pieces. This helps the solder, which is the melted metal that holds the glass pieces together, stick to the glass. After soldering, the piece is cleaned and is then finished.

Roth has made many different stained glass projects and estimates that he has sold 20-30 pieces between the art show and his Instagram account.

“[Selling on Instagram is] pretty easy, as I thought it would be,” Roth said. “Some people just come to me whenever they want and we’ll work out something that they like or they’ll tell me what they want. Then we come up with a design and then talk prices.”

Delivery has also been relatively easy for him, since he is flexible in terms of how he gets his products to his buyers.

“I’ll deliver things, or people pick them up, or I’ll give people stuff at school, so it’s been easier than I thought,” Roth said.

Prices vary by the size of the piece, but most of Roth’s pieces sell for $10-30, which is relatively cheap for stained glass.

“The smallest ones [sell for] below $10 probably, and then I think the most I’ve sold one for is $50,” Roth said. “If you go online, usually stained glass stuff is super expensive. I try not to charge too much because I like doing it and I don’t want to turn people away just because of the price.”

Roth isn’t completely sure what the future of his stained glass business looks like, but he knows he wants to continue making art.

“I’ve thought about maybe making it a small side job or something where I can make a little extra money,” Roth said. “But mostly it’s something just for me to do and have fun.”