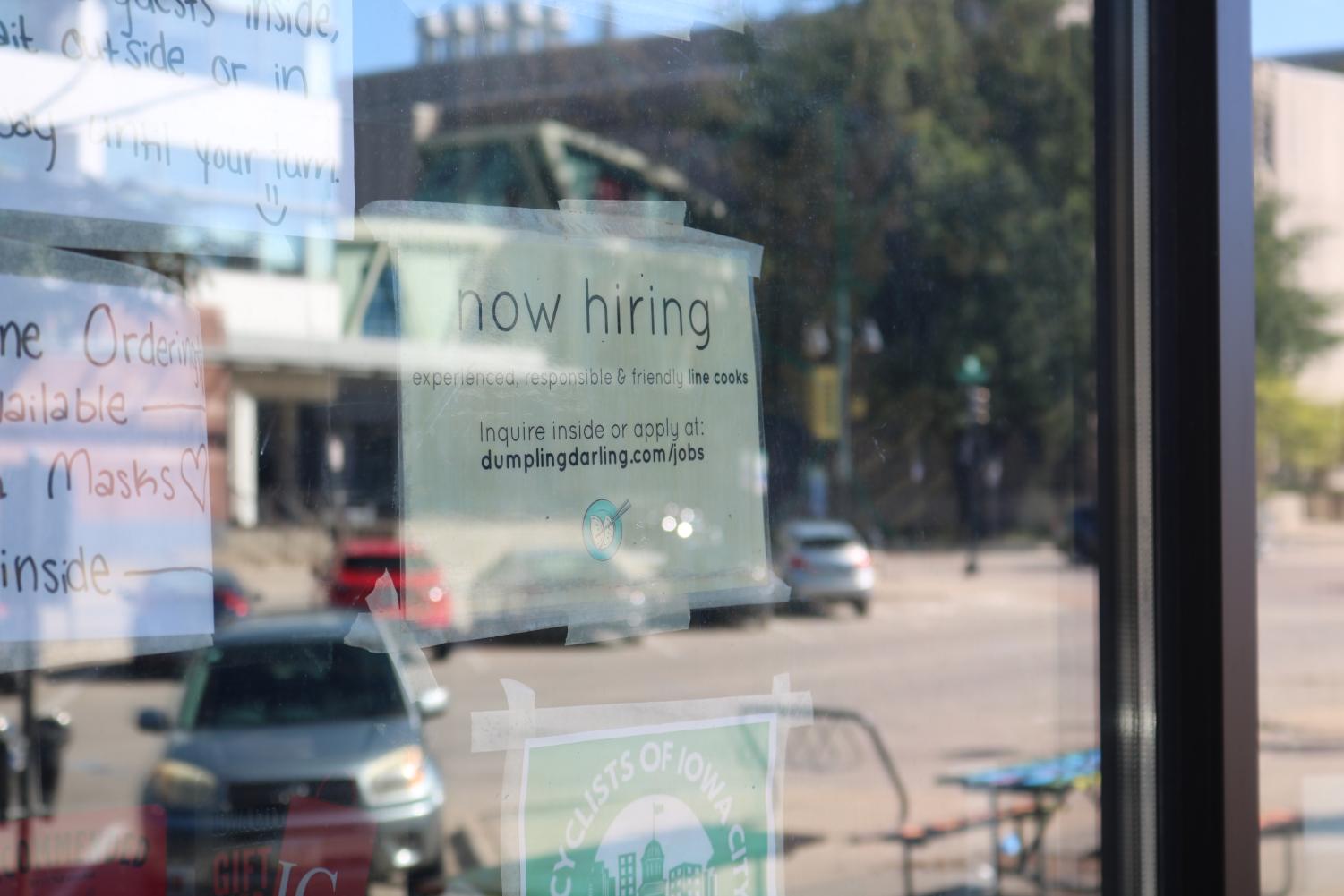 A “Now Hiring” sign hangs in the window of Dumpling Darling, a restaurant in downtown Iowa City, (Greta Stanier)

A “Now Hiring” sign hangs in the window of Dumpling Darling, a restaurant in downtown Iowa City,

Walking down the streets of Iowa City, signs can be found taped up in the windows, each with the same message: Help Wanted. These signs reflect the effects of the nationwide issue, ‘The Great American Labor Shortage’.

“I think there are a lot of people that are afraid to go back to work,” Steve Dodge, an Economics teacher at City High, said. “People who were close to retirement have decided to go ahead and retire, which is removing people from the workforce. There’s been tightening of immigration which has limited an influx of new workers that can add to our labor force, so that combination has certainly been part of it.”

According to the US Bureau of Labor Statistics, in 2020 the unemployment rate was 8.1 percent, more than double the rate in 2019. Now, the unemployment rate stands at 5.2 percent, still at an increase from pre-COVID levels. Many factors such as unemployment benefits, COVID numbers, as well as online school and work, have slowed people from returning to work.

“I think there are people who have young kids that are doing online schooling, and [parents] had no way to care for them while they’re doing online school, so they had to leave their job to do that,” Dodge said. “I think those factors have removed people from the labor force, making those situations more acute than normal.”

The labor shortage has also been reported to be hard on businesses as well as workers.

“There’s a competition for skilled workers that is making it difficult for companies,” Dodge said. “I think a lot of companies would want to expand or grow their business but they can’t find the workers to do that.”

“[People are] seeing more ordering through apps and online kiosks rather than a person,” Dodge said. “You’re seeing more automatic payment systems in restaurants that might help reduce the acute shortages of staff within and get by with fewer waiters and waitresses.”

On both a local and national scale, the labor shortage has been hard on businesses and employees. However, Dodge is optimistic that openings give teens more job opportunities.

“Looking around town, it seems everyone has helped wanted ads or hire signs,” Dodge said. “I think as a teen it gives you more opportunities if you do want to work.”

When looking at solutions to the labor shortage, Dodge is hoping the United States can develop a more sustainable workforce.

Izzy Jurgens ‘22 and Jack Harris ‘22 both found jobs during the pandemic. Working in the midst of a labor shortage, they are experiencing the effects in many aspects of their jobs.

​​People have been taking on way more hours than they said they would, some of the senior staff were working every day for a full week.”

Jurgens started working at Yotopia, a frozen yogurt shop in August of 2020. For Yotopia, a good-sized staff would be around 10 to 12 people, but Jurgens was working on a team of around 6 to 8. Dumpling Darling, a restaurant in downtown Iowa City, has been experiencing similar problems.

Like many local restaurants, Dumpling Darling has had to change its hours to accommodate the shortage of staff.

“We used to be open from just 11 to 9,” Harris said. “Now, we’ve had to switch to where we’re closed from two to five, so that it’s not constantly as chaotic and there’s more time to prep food.”

Harris has been trying to help the restaurant out by coming in for extra shifts. In the past couple of weeks, he picked up extra 3-4 hour shifts at least two times a week.

“I definitely want to make sure that things are going to run smoothly and that none of the other employees are in a situation where the restaurant just devolves into chaos and there’s nothing they can really do,” Harris explained.

Picking up these extra shifts have caused Harris to be a lot busier. Rock climbing, West High journalism, and work programs through Kirkwood have all had to be balanced alongside increased working hours.

“It’s definitely made me a lot more busy. I work both days on the weekends, and then at least twice during the week so then I have to fit in sports and friends,” Harris said.

Like Harris, Jurgens has found that working longer, more rigorous shifts have been tough on school life and other activities. Jurgens ended up taking time off in September when work became too demanding.

“Work was really stressing me out during August right when school started,” Jurgens said. “I felt like I didn’t have any time to do my homework. There was a week where I worked Thursday, Friday, and then I had the SAT the next Saturday morning.”

Both Dumpling Darling and Yotopia have been trying to hire more people, but in the midst of a labor shortage, new staff has been hard to find.

“It’s really difficult to find experienced people right now. We lost one of our managers who had been here for four years or so, longer than anyone else,” Harris said. “There’s just no one we can hire to replace that sort of person, there isn’t really anyone applying to places like these with real, kitchen experience.”

“There was a time during the pandemic where unemployment was paying more than a minimum-wage job,” Jurgens said. “That was just so strange to me. It was kind of incentivizing people who had lost their jobs not to go back into the workforce.”

After experience with working during the labor shortage, Harris has come away with more recognition for workers in the food industry.

“[The labor shortage has] given me more of an awareness, more of a guilt feeling about going into restaurants when they’re swamped because I know that it’s an insanely stressful environment,” Harris said. “A lot of food industry workers are just really poorly paid. When the rest of the world is relaxing and trying to have a good time they are working their as**s off.”

“I’ve definitely seen the signs outside, places are slowly starting to advertise that they’re paying more and more,” Harris said.

Jurgens and Harris both support the minimum wage being raised as a way to strengthen the labor force.

“I think the best way to get people to come back into the labor force would be to raise the minimum wage and provide better benefits,” Jurgens said. “That’s all they have to do. I think that’s been an issue right now because no one is trying to pander to the employee, they’re just trying to maximize profits for the company.”