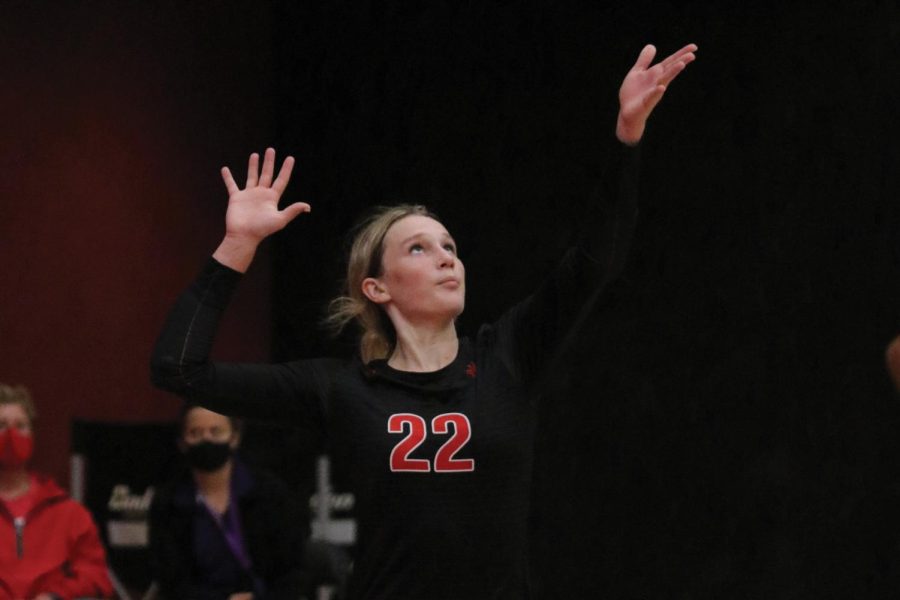 Emmy McComas ‘25 had never played on a volleyball team when she tried out for the junior high team at South East. Now, McComas is in the midst of her first high school season, where she is playing on the varsity team.

“A big part of [the experience] was David, my junior high coach,” McComas said. “When I first started with him, I had never swung at a ball or anything and he pushed me to go to clinics and keep working on volleyball and trying to get better at it.”

From junior high up to high school, McComas has been passionate about volleyball.

“I love the girls, I love playing with them,” McComas said. “I love swinging a ball and the feeling when you get a kill, or going to the center and cheering with everybody. It’s just such a fun, exhilarating sport.”

McComas also plays softball, basketball, soccer, and runs track. McComas often translates the skills she learns in these other sports into volleyball.

“You’re always going in volleyball, and [my other sports] help with knowing the team dynamic, team building and getting to know everybody, and having those experiences with different types of sports,” McComas said.

McComas has had to balance her many sports, along with school and other activities.

“It’s definitely been stressful at times, starting high school while playing volleyball at the higher level,” McComas said. “You just have to remember why you’re doing it and why you love every single sport.”

Playing on a team comes naturally to McComas, as she embraces and learns from the team aspect of volleyball.

“We consider ourselves a family,” McComas said. “It can be so hard to stay moving forward throughout volleyball because it’s a game of mistakes, but we just have to trust each other and bring each other back up.”

“Emmy is a true leader, even as a freshman,” Carty said. “Coaches don’t often see innate leadership qualities like those Emmy possesses in our freshman athletes. Her optimism and drive to become the best player and teammate she can shines through in everything she does.”

McComas is looking forward to the rest of the season. Already this season, she has had 128 kills.

“I’m excited for bonding with the team more and getting better every single day,” McComas said. “Practice-wise and game-wise I just want to be able to say I did my best after every single game.”

Looking towards the future, McComas plans to play volleyball for the rest of high school.

“I’m so excited to see how Emmy develops as a student athlete over the next four years,” Carty said. “The sky is truly the limit for her because her athleticism, attitude, and work ethic are the perfect combination for tremendous success.”