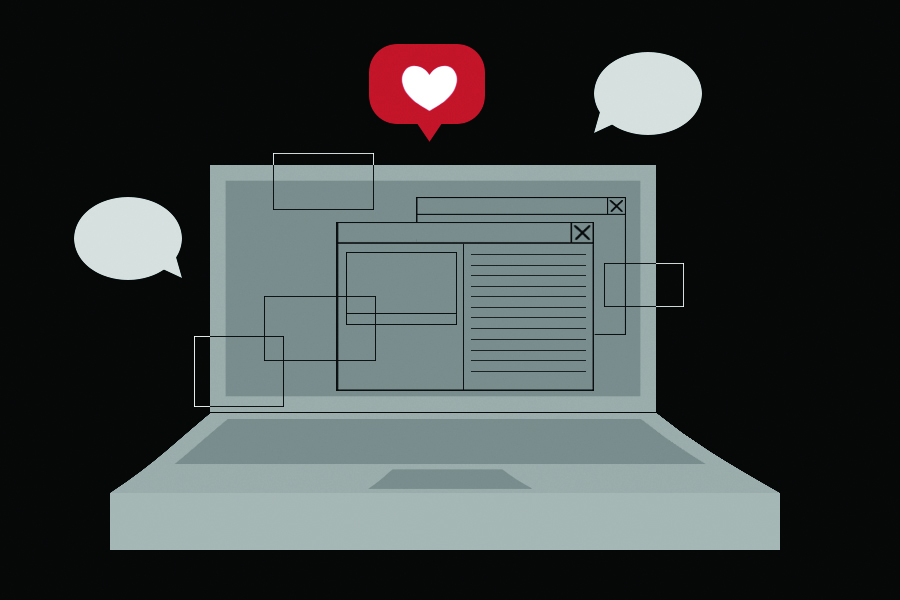 Roughly a quarter (23%) of adult social media users in the United States – and 17% of adults overall – say they have changed their views about a political or social issue because of something they saw on social media in the past year, according to a Pew Research Center survey. (Rosangel Flores-Rubio)

Roughly a quarter (23%) of adult social media users in the United States – and 17% of adults overall – say they have changed their views about a political or social issue because of something they saw on social media in the past year, according to a Pew Research Center survey.

In our present world of social media, the contrast between activism and misinformation has become blurred. How are teens involved in this?

Patrick Johnson hits save as he writes a book chapter about the misinformation found on social media. As a former journalism teacher and current doctoral student at the University of Iowa, he studies the issues of trust and morality in news contexts.

“We’re so used to information being given to us through professional means. Meaning, we see [journalists], for example, as these beacons of information,” Johnson said. “People who are able to not only collect information in an ethical manner, but to also distribute it in a way that people can understand and can be educated from. Pre-internet, this form of communication was something that people relied upon as a civically responsible and democratic norm.”

Today’s youth share the experience of navigating the world through the lens of social media. The rapid and continuous spread of information, as well as misinformation, affects the way young media consumers interact with politics and advocacy.

“With the use of social media, what happens is that anybody can share information, regardless if they’re a professional or not. We see a rise in misinformation and disinformation. People who don’t have experience or professional qualifications feel the need to just ‘share their thoughts,” Johnson said. “It became a very global message board that ended up essentially creating an environment where people said whatever they wanted and people stopped trusting those who should have been trusted.”

Johnson explains that many recent and past incidents have showcased the downfalls of “spreading information” in the spirit of activism.

“Look at the people who are using social media to find missing people, they’re young people. They know how to use it. That’s not the problem. The problem is, oftentimes they are also using it for bad reasons…in terms of activism, what is happening is that a lot of people are doing what we call performative activism. These performative elements are actually becoming detrimental to the causes that these people are advocating for,” Johnson said.

A particular form of non-impactful activism that stood out to Johnson was the black boxes posted on Instagram accounts the summer of 2020. Intended to protest against racial inequality and police brutality, the posts tended to be more performative than actual measures of activism.

Infographics and aesthetically-pleasing posts have become acceptable forms of “activism”, despite the fact that they are mainly used for boosting personal morale.

“Previously, you didn’t have the ability to hide behind a screen. If you wanted to advocate for something you had to go do it,” Johnson said.

“Previously, you didn’t have the ability to hide behind a screen. If you wanted to advocate for something you had to go do it,.”

Norah Mettemeyer ’24 scrolls through Instagram, occasionally finding posts she wants to share on her story. As a very active user on social media, Mettemeyer uses it to express her views and spread information.

Mettemeyer makes many efforts to spread accurate information, paying close attention to sources and what she posts.

“I don’t think that there’s anything necessarily wrong with posting from sources other than news sources, especially if it’s more for specific education on certain topics,” Mettemeyer said. “You just have to make sure that it’s not super biased in any sort of way for or against [the topic].  Whatever I see that I think will help other people, I share.”

Mettemeyer had previously fallen prey to the vast amount of misinformation and performative activism on social media, particularly on Instagram. She reposted many of the “awareness” posts that came upon her feed. After learning more about performative activism, Mettemeyer became aware that many of the posts she was seeing were not actually there for the purpose of activism but rather for increasing an individual’s social capital.

“I used to just scroll through Instagram and the recommended page. Whatever I saw that said these [groups of] people need help, I would repost,” Mettemeyer said. “[Now], reading more about how those accounts have affected people negatively and how they have taken peoples’ struggles and made money off of them, I’m like, ‘Oh, shoot, this is not right’. So now I’m a lot more careful with what I [post].”

One of the ways Mettemeyer has changed her actions on social media is by sharing more information given from major news sources. However, she has not entirely chosen to avoid other sources. Instead, Mettemeyer always makes sure she is confident that what she is reposting is true.

“If I see multiple posts about the same [news], then most likely, it’s probably more accurate. And then I look through the comments just to see what people are saying about it. Then, if I’m still pretty skeptical, I’ll look it up myself, just to make sure that it’s not wrong to repost that or [that it’s] problematic in any way,” Mettemeyer said.

Patrick Johnson holds similar views to Mettemeyer about the importance of searching for reliable sources of information.

“I think teenagers need to be better at thinking about ‘what am I using my social media for’? So, if you’re using Twitter to, say, gain information, then you need to just be following people who are going to give you the correct information,” Johnson said.

According to Johnson, reducing time spent on social media is a critical step to improving the misuse of news spread and activism on social media. By having this time to reflect upon oneself rather than feeling the impulse to increase social status through likes and shares, individuals are less likely to participate in performative activism.

But in the reality of the world, disengaging from social media can be difficult, especially with it growing as a place for communication, learning, and creating global connections with others. This can be seen by the substantial number of social media users in the U.S., where over 70% of the population use such platforms. Because of social media’s incorporation into many people’s everyday lives, a step that can be taken is to choose not to take part in the spread of performative activism, and when social media users accidentally do, to accept their mistake and learn from it.

“If you have been duped by something, learn from it. Give yourself grace that that happens. That happens all the time. [Simply think], how can I be a better version of myself tomorrow?” Johnson said.