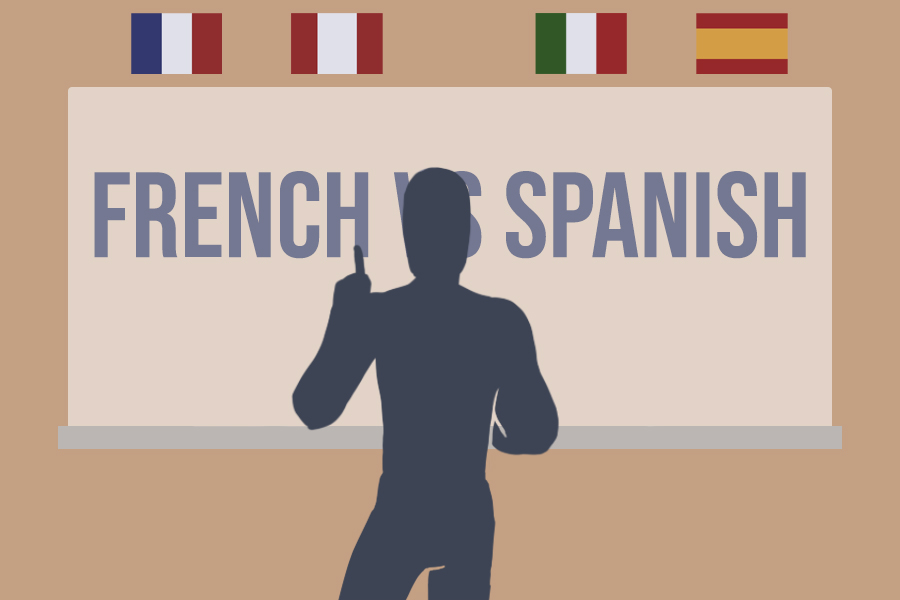 The barrier between French and Spanish depicted on a bulletin board behind a teacher, is drawn and created digitally. (Rosangel Flores-Rubio)

The barrier between French and Spanish depicted on a bulletin board behind a teacher, is drawn and created digitally.

Enrollment differences between French and Spanish have caused staff and students to ponder the future of foreign languages.

Walking down the third-floor language wing, Spanish words and phrases float out of almost every classroom. Continue down the hall and there are only two classrooms devoted to French. The ICCSD’s language program has changed a lot through the years, but one aspect has consistently remained the same: Spanish attracts the most students.

“I think that one of the biggest reasons [Spanish is chosen more than French] is that there’s a pervasive myth,” Jaclyn Ceurvorst, a Spanish and French teacher at City High, said. “[Many people] think that French is harder and Spanish is more useful and easier, but neither of those two things are necessarily true, especially about one language being easier than the other.”

Currently, approximately 720 students are enrolled in Spanish at City High compared to the 120 students enrolled in French. Similar to Ceurvorst, Jax Piker ‘23 also feels that French intimidates students away from being interested in learning the language. Having started learning Spanish in elementary school and beginning French during freshman year of high school, Piker has found unique challenges presented by both languages.

I think that one of the biggest reasons [Spanish is chosen more than French] is that there’s a pervasive myth. [Many people] think that French is harder and Spanish is more useful and easier, but neither of those two things are necessarily true, especially about one language being easier than the other.”

“The hardest thing about Spanish is understanding why [certain] things are the way they are. The actual rules might be simple, but there’s not always a real explanation for why some things are done a certain way,” Piker said.  “In French, a lot of times [things are done for a reason], like because of a pronunciation rule. The hardest thing about French is there are so many specific words [and] putting them in the right place can be hard,” Piker said.

According to the United States Department of State on foreign language training, both French and Spanish are categorized as level one languages, meaning they take a similar number of hours to reach proficiency for a native English speaker. Tony Balcean, another French teacher at City High, agrees that French and Spanish have similar levels of difficulty.

“Scientifically, [the languages] are in the same category, so [French] is not harder,” Balcean said. “Some aspects of each, for different parts of the [learning] process, will be slightly easier than the other, but essentially they’re the same.”

Another prevalent idea driving students away from French is that the language is less useful and practical.  In 2011, the Pew Research center found that besides English, Spanish is the most spoken language in the United States, with 37.6 million people speaking Spanish at home. French is fourth with 2.1 million speakers in the United States.

Piker feels that the reasoning of Spanish-speaking countries being much nearer to the United States does not show the entire picture. Instead, it depends more on what a person’s intentions for the language are.

“I started taking Spanish because of how everyone says, ‘We share a border with Mexico’,” Piker said. “French can be useful if you want to travel to a French-speaking country. Unless you’re going there, being able to speak Spanish doesn’t really make much of a difference. I think that’s a way that people justify their choice, but it’s not very accurate.”

Ceurvorst further explained that aside from being a language teacher, she used a relatively equal amount of French and Spanish in her day-to-day life.

“People perceive learning Spanish as more useful in their daily interactions with others, which might be a possibility,” Ceurvorst said. “Frankly, I spoke French just as often as Spanish when I worked at the mall, or when I was in grad school.”

Owyn Noble ‘24 previously took Spanish before switching to learning French. He noticed students also tend to lean more toward taking Spanish because of how commonly it is chosen and how this influences peers to choose the same language as their friends.

“When you look at your class sheet, Spanish is the most obvious [choice] you’re going to pick. So if people are picking classes, your friends [will more likely] be picking Spanish,” Noble said. “For Spanish, I’m pretty sure the majority of people are just taking it to get it done.” 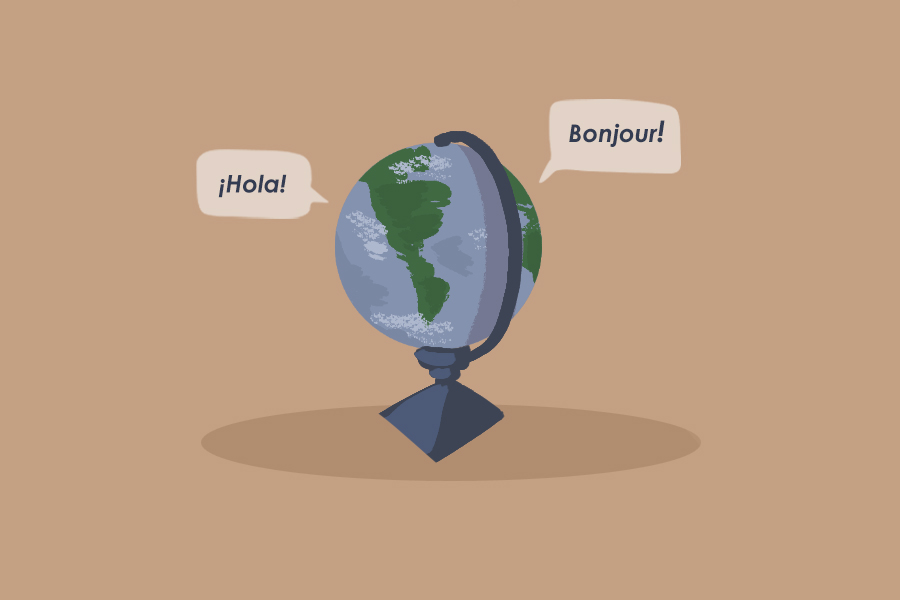 Moving forward, the foreign language program at ICCSD has several directions it could go. Generally though, students and teachers both agree that cutting back foreign languages even further is not the way to go.

“If you choose to cut languages, that speaks to your values. That says that we are not interested in learning about and accepting other cultures and other languages,” Ceurvorst said. “I personally feel like that’s a really poor education to give to our youth.”

Although money is primarily the biggest barrier for expanding to more foreign languages in the school district, Noble thinks that it is essential to give students a choice in their language options.

“There should always be two or more [languages offered] because if there’s just one then there’s no choice,” Noble said.

Casey Wilmesmeier is a Spanish teacher, but she used to be the sole German teacher at City High before the German program got cut. She believes that adding more languages isn’t necessarily the only way that the foreign language program could be expanded.

“In the United States, we start language instruction really late,” Wilmesmeier said.“It’s something that would be much better to start much earlier.”

Wilmesmeier explained that starting younger could be another viable possibility in expanding the foreign language program.

“I think it was in the 90s, students used to have exploratory French, Spanish and German in fifth and sixth grade. Then they would start seriously taking one of them in seventh grade,” Wilmesmeier said.

Ceurvorst agrees that an exploratory program would be beneficial to students in learning foreign languages.

“At that developmental age, learning a new language is something that you have to develop study skills for, and you have to learn about dedication and putting yourself out there taking risks, things like that,” Ceurvorst said.

According to Noble, an exploratory program would also give students a better chance to try out a language and discover if it is something they actually would like to pursue.

“If they start earlier than they have a chance to figure out whether or not they like their language and be able to switch,” Noble said.

Expanding to teach children languages at a younger age would not only help improve fluency but help them in other parts of their lives too. According to research at Northwestern College in Iowa, foreign languages taught at the elementary level help with English literacy, enhance problem-solving and attentional control, and are more likely to help students become proficient speakers in the language because of earlier exposure.

Regardless of whether students actually start learning languages at a younger age, Ceurvorst thinks that Education about language options is essential to allow students to make more informed decisions.

“I think that we should be giving them more information so that they can make a conscientious choice that’s not based on myths or whatever random things they heard or their parents’ particular experience,” Ceurvorst said.

“There’s a stigma around taking French classes. It’s seen as more difficult, that the teachers are going to be less fun, that it’s not as useful of a language. There are a million reasons that people come up with as to why it’s a worse language than Spanish.”

The lack of education when students are choosing languages is what often leads to the misinformation that makes people afraid to take languages other than Spanish.

“There’s a stigma around taking French classes,” Piker said. “It’s seen as more difficult, that the teachers are going to be less fun, that it’s not as useful of a language. There are a million reasons that people come up with as to why it’s a worse language than Spanish.”

The biggest barrier that foreign languages face has always been funding. Foreign language programs constantly have to prove that they are important in students’ lives and worth keeping. According to Ceurvorst, that is something that school districts should be advocating for when their funding is being decided.

Both Ceurvorst and Piker agree that the district should not provide languages for the sake of meeting the language requirement, but for helping students become better global citizens.