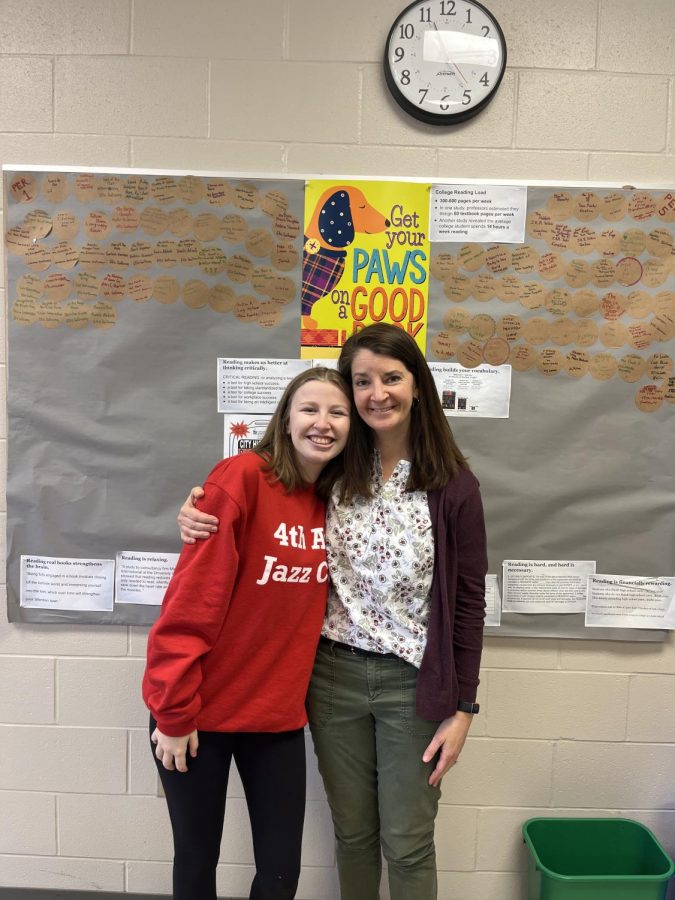 Mrs. Fettweis and Frances Bottorff ’22 pose in front of a “Get your paws on a good book!” poster.

When I switched to City High from Regina, the first few weeks were terrible. I didn’t know anyone, all of my teachers were brand new to me, and I felt lost in a sea of students. I wasn’t used to going to school with this amount of people. It took months for some teachers to learn my name, but that wasn’t the case for Mrs. Fettweis. She made it a goal to know everyone’s name by the end of the first week of school. Walking into her classroom I heard “Frances!” on the third day of school. Her enthusiasm changed my whole view of how my school year was going to go. If I could just make it to third period English, I could make it through the whole day, and eventually the whole year.

Her classroom was a warm, bright place where I felt loved. A place where she sang “On the Wings of Love” every day, and talked to herself using the saying “I says to myself, I says Sister, …”. Singing, kicking, and dancing around the room? Welcomed. Talking to yourself? Encouraged.

She slid books across my desk that have changed the trajectory of my life. Books like Dreamland Burning are so important for every student to read, and she made sure of that. I devoured what she showed our class. Whether that was Lord of the Flies, or Romeo and Juliet, I internalized those texts, because of how talented of a teacher she is.

Mrs. Fettweis is so much more than my favorite teacher. She’s crazy smart and I am convinced she could star in a one woman show on Broadway. Fettweis is from Randolph, New Jersey, which is sometimes why a Jersey accent sometimes appears out of nowhere during class. She is also a talented saxophone player and was heavily involved in music at Wake Forest University. At Wake Forest, she received a degree in English and Women’s Studies. After that, she ended up at the University of Iowa for her masters in Literary Studies and teaching.

Mrs. Fettweis never thought she would end up as a high school teacher. She had plans to be a lawyer, and then a professor, but then realized that the answer might be teaching. A past student of hers posed her with the question, “Books or kids?”, and I think her answer speaks for itself.

“I’ve since realized that if the answer isn’t kids, I never would have made it. I really like kids,” Fettweis said.

That is the best part about Mrs. Fettweis. She genuinely likes us. She wants to know how we are really doing, and is the best listener and advice-giver in the world. This past year I left one of my classes feeling upset. I wandered the halls, not knowing what to do. I decided to try and go to the NESTT, but I ran into Mrs. Fettweis on the way up there. I ended up spending my entire fourth period with her, going on and on about what was happening. I felt respected enough to be vulnerable and honest, which sometimes can be hard to find with teachers. Her words gave me strength, and made me feel so heard. She cared about how I was feeling, and gave me grounded, unbiased advice. In a time where I felt I had no one at school, she was still cheering me on.

I haven’t had Mrs. Fettweis since I was a freshman, but obviously, the impact she has had on me is quite profound. She cared enough to make sure we still had a relationship, and I always knew she was on my team. Fettweis is one of those lifelong role models and for that I am so very thankful. I am also thankful for the inner dialogue I was provided in ninth grade. I find myself using “I says to myself, I says, Sister…” more often than I’d like to admit. To know her is to love her, and I love her very much.

Thank you, Mrs. Fettweis, for remembering my name, and making me feel heard.