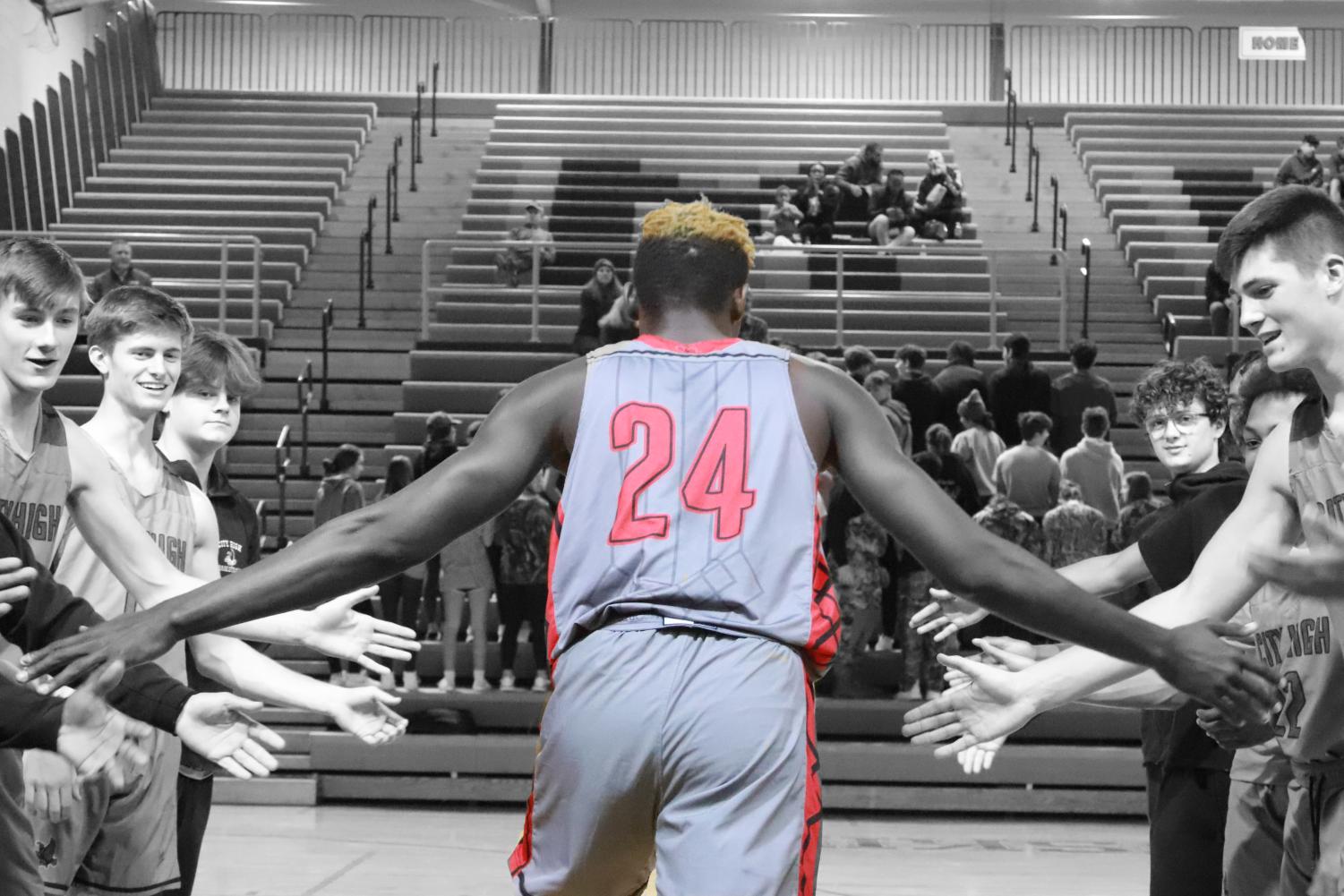 Sam Mbingazo ‘26 takes the court against Muscatine where the team held for thier first victory of the year. (Bobby Bacon)

Sam Mbingazo ‘26 takes the court against Muscatine where the team held for thier first victory of the year.

Sam Mbingazo: From the Congo to City

It’s not every day that a six-foot-nine freshman from the Democratic Republic of the Congo transfers to City High. It is even rarer that the same kid is a highly recruited basketball player with multiple division one basketball offers. That is Samuel Mbingazo ‘26.

Born in Kinshasa, the capital of the DRC (Democratic Republic of the Congo), Samuel didn’t play basketball initially when he was growing up. “In fact, my parents didn’t like it when I played basketball. When I was on my way to practice, they would say, ‘no, stop, go to school, not to practice,” Mbingazo recalled. It wasn’t until his ninth birthday that his uncle told him to play basketball. His uncle saw the potential that Samuel had, being extremely tall and lanky for his age. Basketball became an everyday obsession for Mbingazo. He would go with a neighbor to train before and after school every day.

A couple of years prior to Mbingazo moving, his uncle moved to the United States. Seeing the potential for Samuel, he convinced him to move across the world. “He told me that, in the United States, you can study and play basketball and that your doors will open to opportunities like the NBA. In the Congo, [those opportunities] are not as good.”

At first, he moved to Los Angeles, California. Mbingazo lived with his coach and spent almost all of his time playing basketball. During this time he began to make great leaps in his basketball abilities. However, he was only going to school maybe two to three times a week. He wasn’t able to learn English, which was one of the big reasons for moving to the United States.

After sitting down and talking with his uncle, they decided that it was best for Samuel to move in and live with his uncle in Iowa. “My uncle told me to come to Iowa’s high school [where] I could come here to better learn English,” Mbingazo commented.

After moving to the Iowa City School District, Samuel and his uncle decided it was best to attend City High. “When I came, I knew players from this school, like AJ and Jameer. When I came here, my uncle told me to stay and study here. He told me to go to City High because this is a good school.” Mbingazo elaborated.

Only being a freshman, Samuel still has four years of high school basketball left to play. After he completes his high school career, he plans on attending college and playing basketball in college. He has multiple Division One offers and lots of interest from other schools. He has requested that these offers and interests be kept quiet until he has a better understanding of English. He does not want to misrepresent himself or his intentions. However, a player like Samuel is one with an extremely high ceiling and lots of potential.

Samuel is looking to be a large contributor to the varsity boy’s basketball team this year. He is hopeful that the team will have more success than that in previous years. He has stated that he is willing to do whatever it takes to help propel the team to new heights. Samuel Mbingazo has demonstrated what it means to be a great player and teammate.