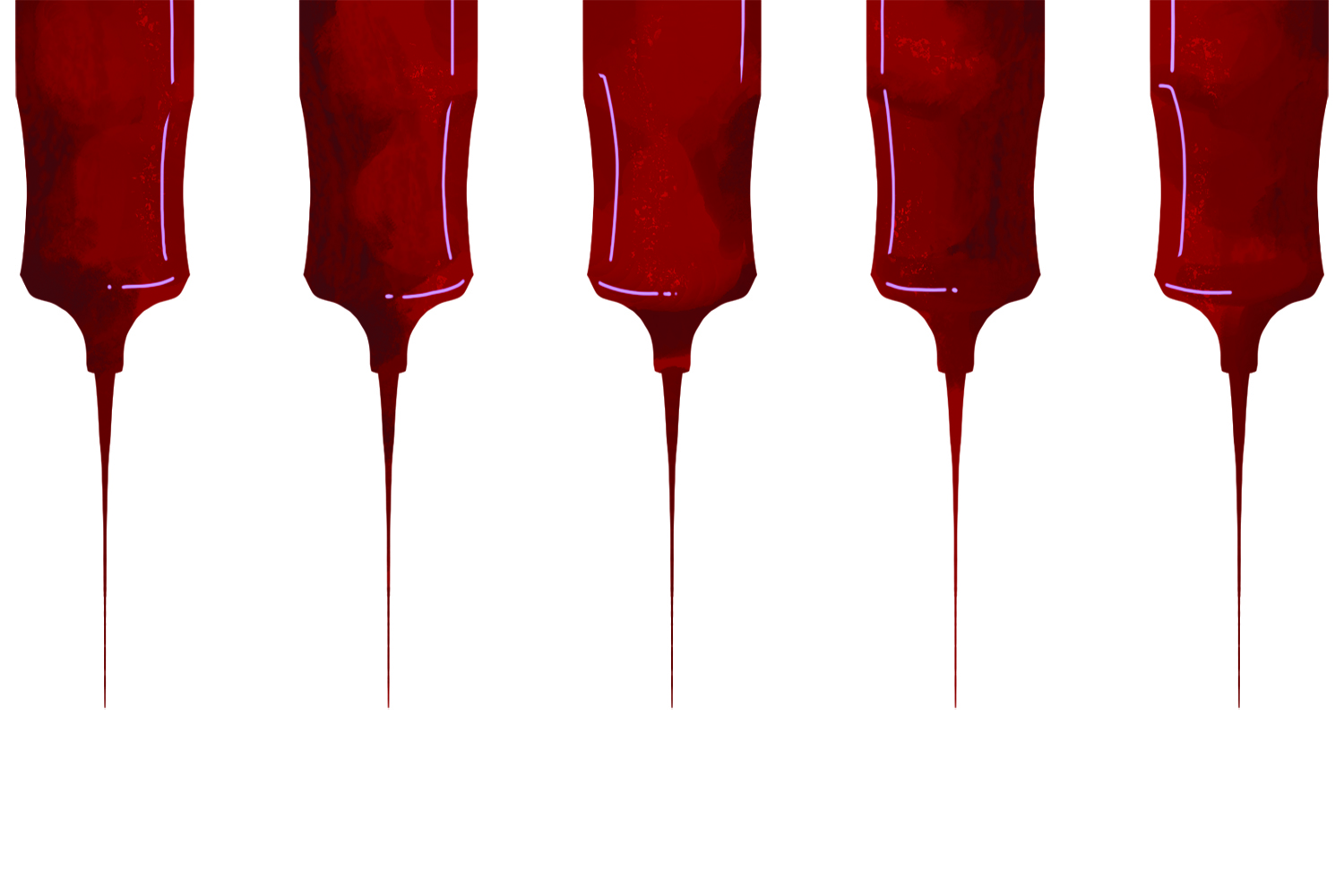 Deaths due to Fentanyl have rose over 120% for those 25 and under, Iowa convened a national hearing in Des Moines and the ICCSD approved Naloxone to be used by school nurses to treat overdoses. (Rosangel Flores-Rubio)

Deaths due to Fentanyl have rose over 120% for those 25 and under, Iowa convened a national hearing in Des Moines and the ICCSD approved Naloxone to be used by school nurses to treat overdoses.

The Rise of Overdoses in Young adults

With the rise of overdose deaths due to Fentanyl rising 120% for those 25 and under, Iowa convened a national hearing in Des Moines and the ICCSD approved Naloxone to be used by school nurses to treat overdoses.

In response to the fentanyl problem, Chuck Grassley hosted a national field hearing on fentanyl in Des Moines. In 2021, Iowa’s Division of Criminal Investigations analyzed 17,000 pills containing fentanyl.  In 2022, they found fentanyl in over 90,000 pills and received three times as much powder-based fentanyl.

“According to the Iowa Department of Public Health, drug overdose deaths have climbed 34 percent between 2019 and 2021. Tragically, 470 lives were stolen by drug overdose in Iowa just last year,”  Senator Chuck Grassley said in response to why he held the hearing in Iowa

As a co-chair of International Narcotics Control, Grassley hopes to raise awareness and provide solutions because “enough is enough”. Grassley went on to share stories of young Iowans, such as Sebastian Kidd age 17, Devin Anderson age 23, and Bailey Arwine age 22 who have recently died due to fentanyl.

It is often cut into other drugs and sold in several forms, and Iowa lawmakers at both the state and federal levels have put a focus on counterfeit pills containing fentanyl being sold illicitly and pressed to look like prescription drugs such as Oxycontin and Xanax.

To work on the prevention of deaths in Iowa City, school nurses are now being trained to use Naloxone.

“Naloxone comes in various forms but we’ll be getting it as an intranasal medication which is just sprayed in the nose. It is atomizing so that you absorb it pretty quickly,” Suzi Wilkes, the school nurse, said.

Opioid use depresses the part of the brain that controls breathing, and when too much is administered, it can cause an overdose. Naloxone blocks the opioid receptors, which reverses the effects of the opioid, ceasing the depression of the breathing center and returning to normal breathing, therefore, preventing an overdose.

It is extremely advised that emergency responders call 911 as soon as possible before or after administering Naloxone. Naloxone only lasts for 30-90 minutes in that time frame the opioids may not have worn off and in that case, the person will stop breathing again.

“The great thing about Naloxone, it’s also called Narcan, is that it is a very safe medication. So if we have a student, staff member, or building visitor that is unresponsive, and we think that they may be overdosing on opioids, even if you give Narcan and they’re not experiencing an opioid overdose it’s still safe to give,” Wilkes said.

ICCSD’s decision to instate this life-saving drug at schools will add an extra safety net to make schools an even safer place to be for students and faculty alike according to Wilkes.

“Having Naloxone in schools is overdue, it’s a good thing. There are a lot of risks in this population and with staff and visitors and so it’s going to be a really good thing to have Naloxone here in the event of an emergency,” Wilkes said. 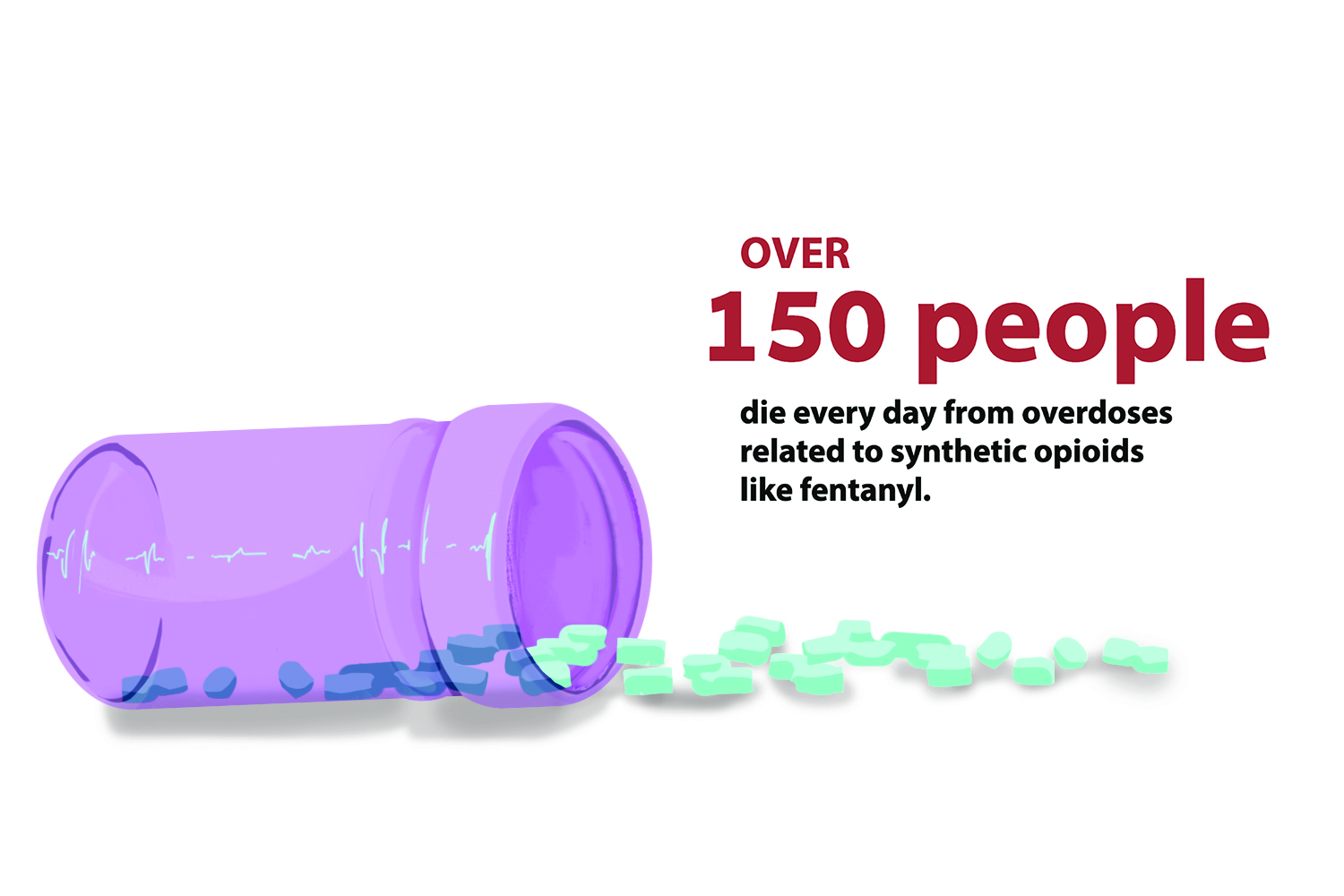 Statistics compiled by the CDC.

“Most overdose deaths are due to what people are starting to call poisoning more than anything else. Because it’s people who think they’re using some other substance and are getting fentanyl instead,” Carrie Hough Community and Family Resources specialist said.

Fentanyl gives many effects for example euphoria, pain relief, confusion, drowsiness, nausea, and vomiting according to the DEA. People often seek out drugs for mental relief and the euphoria that comes along with using, but these drugs are double-edged swords that are often fatal at small doses.

“What a lot of people don’t know about opiates is that it doesn’t just take away physical pain. For example, OxyContin is prescribed to take away physical pain. It also takes away emotional pain and gives a euphoria or a good feeling. In that state, you can’t feel the emotional pain that you might be going through. So a lot of people who have trauma are drawn to using an opiate because it’s going to take away that emotional pain for a short period of time,” Kayla Borja Frost the outpatient clinical manager at Community Family Resources said.

Why is fentanyl dangerous?

Kayla Borja Frost believes Fentanyl to be dangerous because young people seek out the pharmaceutical versions of the drugs they consume assuming it is safer. The issue is that illicit versions of drugs can often not be distinguished by young people as pharmaceutical vs illicit, illicit which have a high chance of being laced with deadly compounds such as Fentanyl. Among adolescents, Fentanyl-involved fatalities increased from 253 in 2019 to 680 in 2020 and to 884 in 2021 according to JAMA Network.

“If you’re taking any medication that is not yours that has not been prescribed to you by a doctor it’s a huge risk because Fentanyl is so pervasive. The number one thing that is important to draw attention to now is that illicitly manufactured fentanyl is the driver of the trend we’re seeing in the increase of overdoses,” Hough said.

If you’re taking any medication that is not yours that has not been prescribed to you by a doctor it’s a huge risk because Fentanyl is so pervasive. ”

Fentanyl has one of the highest rates of overdose out of any drug because it is extremely potent, as aforementioned. A lethal dose of fentanyl is a minuscule amount, about two milligrams which is as much as could fit on the tip of a pencil, and according to the DEA, 42% of pills tested for fentanyl contain a lethal dose. It is added to other drugs to cheaply enhance the potency of the drug, often without the user’s knowledge.

“Oftentimes people are seeking out what they can get and what their dealer has, but people also want to be able to predict what effect it might have and what they are taking which you can’t do with any random drug. But people should also know that fentanyl is essentially ubiquitous in the drug supply. Certainly heroin and other opioid pills, but it’s also now showing up amphetamines and cocaine. If somebody is using other drugs, be aware that they could unknowingly be using fentanyl,” Dr. Josh Radke, the associate professor of clinical faculty at the University of Iowa said.

Since the pandemic there has been a rise in drug use as a result of social isolation, people feel lonely and disconnected from each other. This presents a challenge to those in which social interaction is a mental health outlet according to a study conducted by Addiction Science and Clinical Practices.

“During the pandemic, it was harder for people to find mental health and substance use resources,” Frost said.

Another issue is during the pandemic it became increasingly easy to access drugs on the internet and using social media apps. For example, features of social media apps such as Snapchat’s feature in which chats delete after 24 hours enables dealers to sell drugs and then the evidence of the dealing is gone according to the Guardian.

“There have been factors within social media that have made it easier for people to access drugs than it is to get the mental health help that they actually need,” Kayla Borja Frost said.

Myths regarding Fentanyl have been circulating the internet ever since Fentanyl deaths started to dramatically increase. One of the more popular myths being spread is the idea of casual exposure by touching something that has Fentanyl on it.

Rainbow fentanyl and other synthetic opioids have been introduced into the drug market. Specifically, rainbow fentanyl has been speculated to be targeted at younger audiences not necessarily children but young adults, this claim has been proved for the majority, false.

“I would say it is a myth that drug dealers are marketing toward teenagers who probably don’t have a lot of disposable income for drugs, there have been different colored pills for a long time, pharmaceutical and illicit, this is not something new that will be used to attract teenagers,” Dr. Josh Radke said.

There is also a new drug under the category of a synthetic opioid called protonitazene. This drug does not have any pharmaceutical use which makes it increasingly dangerous and more likely to be a fatal substance. Statistics on these variations of fentanyl are uncommon due to technological barriers.

“Unless someone knows and tells us specifically that they have been using a variation of fentanyl, we are unable to know if they are using it because we can not test for it,” Kayla Borja Frost said.