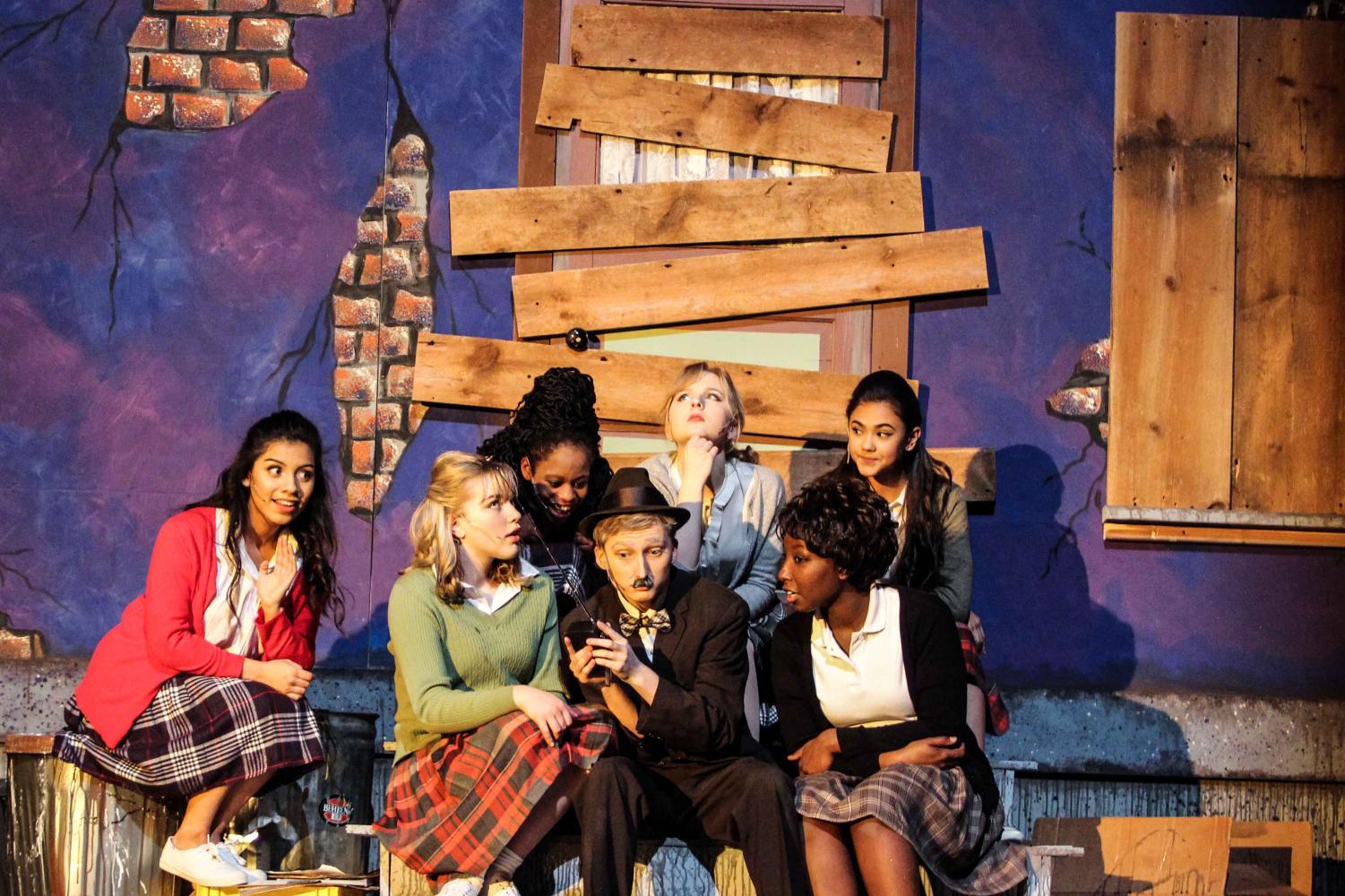 The spinning stage turned to reveal a huge plant that spoke, sang, and ate people. Bringing this monstrosity to life from the inside, Clara Froeschner ‘18 controlled its movements, while its powerful voice, sung by of Amadou Sanogo ‘18, filled the theater.

“Aside from hot, claustrophobic, and very physically uncomfortable, it’s actually pretty fun,” Froeschner said. “I get a big [audience] response from doing almost anything.”

The City High Drama Department performed “Little Shop of Horrors” for this year’s spring musical. It tells the story of a young flower seller’s assistant named Seymour. Seymour buys a plant, names it Audrey II, and ends up learning that it is hungry for blood. The plant, shown with puppets rented from a warehouse in Huntley, Illinois, was portrayed in four stages, each time growing just a little bit larger.

Clara Froeschner, who puppeteered the two largest two plants found it was unlike anything else she had done before.

“[Puppeteering] is really fun, a little scary, a little tiring, and an adventure,” Froeschner said.

Froescher found that she had to spend time learning how to control the plant. Throughout the weeks when she was able to work with the puppets she had to find different ways to maneuver them, so she would be more comfortable. One thing that she strengthened in this role was her connection to Sanogo.

“Amadou and I have been friends but this brought our friendship to a whole new level. I’ll see Amadou in the hallway now and he’ll say ‘Hello body’ and then walk away which sounds really weird to passersby, but it’s really funny,” Froeschner said.

For Amadou, playing Audrey presented new challenges, since he was not actually onstage, but backstage.

“It has been very fun, and a new challenge, because you have to portray the character without being onstage. That presents a whole new set of challenges,” said Sanogo. “If anyone cares to venture backstage, they will see me doing a lot of dancing and a lot of movement to keep my energy up all the time.”

Another difference between previous musicals and this one was that along with Amadou, the pit orchestra was backstage.

“It’s interesting. I’m more of a traditionalist. I like being in the pit. I feel like we can interact more with the cast, but this is taking us out of our comfort zone, which is good learning for all of us,” Megan Stucky, the conductor, said. “There are advantages to being back here. We don’t have to dress up and wear all black. That’s a plus. For me, personally, I really like having Amadou back here. We get to jam out and put some soul into it which is fun.”

Five musicians and one director worked in the orchestra pit, unlike during “Guys and Dolls”, when it had included 22 musicians. At first, they rehearse alone, but move to working with the cast as it gets closer to the show.

“These are really easy students to work with. I’m lucky that I have capable musicians. They’re not normal, but in a good way, they are very high-ability musicians,” Stucky said.

This musicianship is reflected in their performances as well as their pre-show jam session.

“It’s a lot of fun, especially when we do the jam sessions before, during, and after the show. We try to get everyone in on soloing and playing,” Levi Pugh said.

For three of the musicians, it was their first time playing in pit. While for others, seasoned veterans, like Levi Pugh ‘18 he had been playing since he was a freshman. Pugh shared his thoughts on what pit has meant to him over the years.

“This has given me the opportunity to conduct and play in a pit orchestra and it’s set me up for wanting to do more of this in my career as a musician,” Pugh ‘18 said. “It has been really fun to be part of this production and I hope this isn’t the last one for me.”

Another way this show approached acting differently was by double-casting the two lead roles of Audrey and Seymour, who were double-cast as Lauren Rude ‘20 and Veronica Abreu ‘19 Aidan Smith ‘19 and Tobey Epstein ‘21 respectively.

“[Tobey and I are] similar in some ways, but we also have a different take on Seymour. I’ve noticed I take the character in more of a serious and kind of depressed way, while he takes it a little more comically.”

While the actors shared notes, they also found ways to make the character uniquely their own.

“Double-casting worked really well in my opinion,” Rude said. “If one of us had to miss a day we would share notes or we would have people take notes for us and that worked really well. Veronica is super professional she’s worked in a lot of shows so there was no weird competition between us for Audrey.”

“Little Shop of Horrors” boasted not only one, but two villains. David Keffala-Gerhard played Orin. The character is a sadistic a dentist yearbook who eventually suffocates on laughing gas, before being fed to the plant.

“[Playing Orin] has been super fun, creepy, and uncomfortable all at once. My favorite song is “Dentist” for sure, because it’s a fun song, but I prefer the scene of my death,” said Keffala-Gerhard. “It’s a different side of the character and being able to die is not something a lot of people get to do in shows.”

Through the long tech week, the cast spent hours working together to bring to life “Little Shop of Horrors”, which previewed on April 20th, and ran through the 22nd along with holding an extra showing for sixth graders from nearby elementary schools.

“My favorite part was working with the amazing cast. I think the cast is really good this year, and everyone is super into it. It’s been really enjoyable. The set work is great and having people who are this dedicated is really a blessing,” Keffala-Gerhard said.