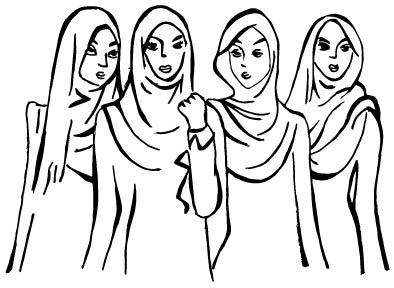 Hijab is an Arabic word which directly translates to “barrier.” Many would recognize the word to mean the headscarf worn by Muslim women out of religious faith. Others would call it a tool of oppression in a patriarchal society that aims to police women’s bodies. City High is home to a growing Muslim student population, some who choose to observe modest dress and others who do not.

Contrary to popular belief, the hijab is not merely a physical object, but rather, it is the concept of both internal and external modesty. It does not simply stop at covering one’s hair. Within the Muslim community, there has been a lot of dispute over whether or not covering the hair is mandatory (fard) to fulfilling the demands of Islam. If this is, in fact, the case, then choosing not to cover one’s head would be impermissible (haram) in the faith.

Feda ElBadri ‘21 is a Muslim woman who chooses not to cover her hair in public.

“For me, [the concept of] hijab is modesty,” ElBadri said. “I don’t want it to seem that anything that I do outwardly somehow shows who I am inside. I don’t think that the way we act and the way we appear to other people somehow means that we’re good or bad.”

Still, many Muslim women who do cover their hair,hijabis, derive confidence and empowerment from their headscarves.

Nadal Elmak ‘21 believes that covering the hair is fard, and first began covering her own hair at the age of twelve. It was a decision that came not without strong deliberation on her part.

“I was like, ‘What if people start bullying me because I’m wearing this hijab? And I see other people getting mean comment[s]. Maybe I shouldn’t wear it,’” Elmak said.

Despite her inhibitions, she ultimately decided to wear a headscarf to school one day in seventh grade.

“I felt nervous. It was really scary and people would just stare at you,” Elmak said.

Though three years after that first day in seventh grade, Elmak has yet to regret her initial decision to begin covering her hair and believes that it has strengthened both her spirituality and her confidence.

“I feel like a hijab is protection from other people,” said Elmak, “I don’t need anyone. I can talk and feel protected with the hijab. I feel Allah [God] with me everywhere.”

While Elmak may have had to come to term with her anxieties about other people’s perceptions of her hijab, ElBadri has dealt with misconceptions surrounding her spirituality and commitment to Islam due to choosing not to cover her hair.

“People don’t think I’m Muslim or they think that I’m not religious,” said Elbadri. “I cover my hair to pray, and perhaps because hijab is interwoven with communicating to God for me, it is always going to have that wearer-to-God connection.”

The Muslim community is a large one, with an estimated 1.8 billion followers, according to the Pew Research Center. With that kind of size, it should come at no surprise that not all followers of “the world’s fastest growing major religion” believe covering one’s hair and abiding by the rules of hijab are a required part of the faith.

Samina Ali is an outspoken author, Muslim feminist, and activist who has written for The Huffington Post and The Daily Beast among others. Her TEDx Talk “What does the Quran really say about a Muslim woman’s hijab?” has garnered over 3.8 million views since it was first published at the beginning of 2017. In it, she describes hijab as it is interpreted in the modern day as a byproduct of misogyny, functioning as a tool to police Muslim women’s bodies and keep them in roles which are subservient to their male counterparts.

Muslim women’s relationship with hijab does not exist on a binary. A woman’s perspective on the idea of hijab may even change within her own lifetime. Enter Dina Torkia.

Torkia, better known by her web alias, Dina Tokio, is a Youtube personality and social media influencer who first rose to prominence making hijab tutorials and marketing herself as a modest fashion icon, recently caused a stir online when she chose to publicly discontinue wearing her headscarf.

Torkia, who also made comments condemning the community of Muslims who choose to don the headscarf as a “toxic cult,” has since received torrents of negative backlash for her public decision. So much so, that she was able to make a 45-minute video just by reading through the vitriolic comments on her videos.

Torkia provides a very public and severe example of the criticism that Muslim women face when making decisions about how best to follow their faith. While having doubts about hijab is not uncommon, many women do not end up removing their headscarves as a result of them.

Heibat Ahmad ‘21, much like Elmak, was in the seventh grade when she first began covering her hair.

“I had just come back from my trip to Sudan and I saw all my neighbors and family wearing them. I wanted to try it out and I stuck with it,” Ahmad said.

Unlike Elmak, however, Ahmad did have doubts following her decision.

Neither Ahmad nor Elmak can recall ever having felt pressure from family members to begin covering their hair.

At the end of the day, ElBadri wants Muslim girls to know that they have a choice when it comes to whether or not they will cover their hair.

“If we say something like, ‘All Muslim women should wear hijab,’ what are we going to do then? Are we going to make it a problem for Muslim women who don’t wear hijab?” asked Elbadri. “I value the connection that [I] have to God, to Allah, more than anything else. If you feel that [covering your hair] will strengthen your connection, then you do what you do. You do it to be a better Muslim, to be a better person. I don’t want it to be that you’re trying to be better for anybody else, because at the end of the day it’s about you and your relationship with your religion.”